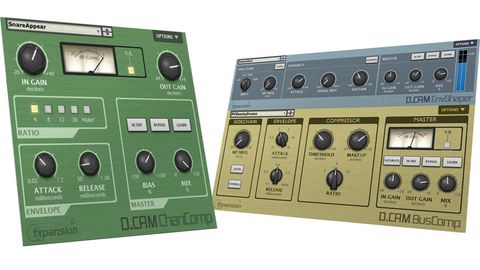 Four excellent and diverse compressors from one of the finest development houses.

The follow-up is DCAM Dynamics, a quartet of component-modelled compression plug-ins: BusComp, an SSL-style bus compressor; ChanComp, an 1176-style limiting amplifier; CrossComp, a frequency-conscious buss compressor; and EnvShaper, a transient shaping compressor. None of them are going to win any beauty pageants but the GUIs are big, clear and sensibly laid out, which is, of course, the main thing.

Common to them all are MIDI Learn, a Hi Def mode for 4x oversampling (at the expense of CPU overhead) and a modest preset library. BusComp is intended for use on group and master busses. It's as easy to use as its inspiration, with all the expected controls in place, including the indented Attack, Release and Ratio knobs, the latter of which gives only 2:1, 4:1 and 10:1 options. There's also a high-pass filter on the sidechain, for taking the key input out of the circuit up to 5kHz and a mix control for parallel compression. It sounds every bit as good as The Glue on drum busses and full mixes but perhaps a little ballsier than the smoother Glue.

ChanComp is also largely defined by its parametric limitations, just like the hardware it apes. With Ratios of 4:1, 8:1, 12:1, 20:1 and 'Nuke' (emulating the 1176's high-impact 'all button mode'), and no threshold control, you can't really go wrong. An interesting inclusion is the Bias knob, which sweeps through a range of capacitor values, presenting a spectrum of colours and drive variations. Again, a Mix knob is dials in parallel compression.

ChanComp's lack of tweakability really does work in its favour. It can improve the dynamics and sound of just about any acoustic, electric or electronic source, and its super-fast attack (0.02-1.2ms) ensures that nothing escapes its attention - the parallel compression provided by the Mix knob, however, lets drum transients retain their clarity and punch.

CrossComp aims to provide frequency-conscious compression without the hassle of a full-spec multiband plug-in. Essentially, it splits the input in two at the specified crossover frequency (between 100Hz and 14kHz), then allows either one (or the whole input) to be sourced for both the Process and Pass-Thru signals. Process is sent to the compressor, while Pass-Thru goes straight to the output stage, thus enabling compression of just the highs or lows - although, as you may have figured out, both can also be fed the same input signal for filtered parallel compression. The compressor's peak detection can also be keyed off the same three input signals, as well as the external sidechain.

The processed and unprocessed signals are mixed at the final stage, where each can be saturated (with further saturation at the master output) and phase-inverted. Very helpfully, a comprehensive array of Listen options lets you monitor every one of the numerous signals involved, pre-processing: input, either side of the crossover, sidechain, Pass-Thru and Process. The compression circuit itself does its thing at up to 60:1, with a variable knee and a Fast Release option.

CrossComp is clearly the creative member of the team. The combination of parallel processing and frequency-conscious compression can work wonders on full drum tracks and sampled loops, in particular, delivering everything from gentle enhancement of transients and presence to extreme level-clamping. It's also supremely easy to use (which it could easily have ended up not being), largely thanks to that excellent monitoring setup.

Finally, EnvShaper takes its inspiration from SPL's Transient Designer (although it doesn't work in quite the same way), empowering us with the quasi-magical ability to raise/lower the transient and sustain stages of the input signal. The controls couldn't be simpler: Attack and Sustain set the levels of the two stages, while Signal Bias adjusts the transient sensitivity and release response. The input can be taken from left, right or both channels, and high-pass filtered from 20Hz to 5kHz should the bottom end have too much of an influence on the processing.

EnvShaper's most obvious application is the lengthening or shortening of drums and percussion, but basses are also fair game, as well as short synth sounds, pianos and even guitars. It does a fantastic job of bringing transients up (or down) in the mix without damaging the surrounding material (although, of course, there are program-dependant limits), and an almost-as-fantastic job of boosting or killing reverb tails, cymbals, etc.

All of these compressors are great at what they do, but CrossComp is our favourite - possibly because it's the only one that doesn't already exist in various other forms. It doesn't take the place of a true multiband compressor, since it only compresses one band, but it can do cool things like rein in the bottom end of a signal then parallel mix the dry full signal back in, or squash the whole signal and mix it in parallel with just the dry highs, for example.

The two 'classics' - BusPressor and ChanPressor - are timeless in terms of sound and application, and both do a solid job of emulating the original hardware. If you already own any SSL and 1176 emulation plug-ins, you may not have much use for them, though. And finally, EnvShaper, which makes transient shaping every bit as straightforward as it ought to be but brings its own sound to the table, rather than shooting for total transparency.

DCAM Dynamics proves (as an increasing number of new plug-ins seem to be doing) that top tier track/mix processing really doesn't have to carry a hefty price tag. The modelling is spot-on, the sound is gorgeous, the usability is excellent and the range of compression bases covered is broad yet individually focused. Yet another winner from FXpansion.