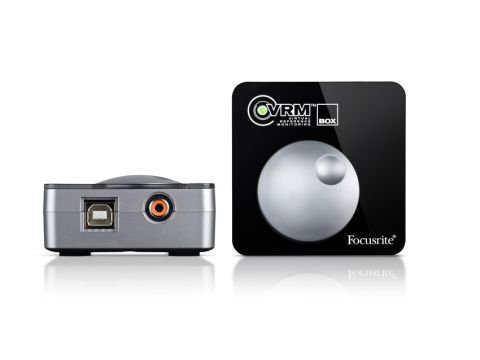 A unique concept that's a powerful resource for headphone mixers.

Read mix advice from any worthwhile source and you'll ﬁnd that checking your mix on a variety of different listening systems before printing it is universally considered a smart move.

A second piece of advice is that, whenever possible, it's well worth avoiding mixing on headphones alone, as even the most 'pro' cans still don't behave in the same way as a pair of speakers and therefore can't be trusted as a sole monitoring source.

"VRM provides a vaulable resource, both for both those who those who monitor on headphones and for the rest of us who enjoy the reassurance of varied monitoring environments."

However, more and more laptop musicians are trusting in headphones as a primary monitoring solution and even for studio musicians, multiple monitoring systems are beyond the ﬁnancial means of amateur and semi-pro studios.

So, Focusrite have provided a neat solution - a dedicated playback interface that uses impulse responses and modelling to provide Virtual Reference Monitoring, or VRM for short. Genius, or mere gimmickry?

The VRM Box itself comprises two key ingredients. Firstly, the device itself - an attractive black and grey seven-centimetre square with a depth of just three centimetres - clearly, this is designed as a palm-sized device to take with you, though its rubber feet also make it perfect for sitting atop your studio controller keyboard.

Connection-wise, VRM Box offers a USB cable to directly monitor your computer's output, as well as a S/PDIF connection if you'd rather slave a signal from your audio interface.

Apart from then plugging in your headphones and setting a listening level courtesy of the sleek silver alpha-dial on VRM's top surface, it's then over to the VRM software to pull the monitoring strings.

This is achieved via the dedicated VRMapplication, ﬁrstly by choosing your listening environment: Professional Studio, Bedroom or Living Room.

Within these categories, a drop-down menu on the right then allows you to pick your desired speaker pair, with the Pro Studio option providing models of classic studio monitors including Japanese White Classic (an NS-10 algorithm), KRK Rokit6 and VXT8 models, Auratone, American Passive, British Studio, Genelec 1031A, plus Adam S2.5A and Rogers and Stirling LS3-5A models.

The Bedroom algorithms include ﬂat-screen TV, computer desktop and two vintages of hi-ﬁ speaker, while the Living Room provides a shorter list with models from the ﬁrst two categories.

All monitor options have been encoded from impulse responses taken from the speakers listed, while the environmental side of VRM, through the three listening spaces, has been constructed from spatial modelling.

Does buying VRM mean that you don't need a pair of high-quality monitors? No.

Does it provide an opportunity to test your mix through a series of modelled systems and environments? Yes, and as such, VRM provides a valuable resource, both for those who monitor on headphones and for the rest of us who enjoy the reassurance of varied monitoring environments, even if they are emulated.

If this technology has piqued your interest and you're also at the stage of choosing a new audio interface, it's well worth checking out the Focusrite Safﬁre 24 DSP, which contains the same technology onboard.

All in all, VRM is a well-priced, fairly unique concept that will give you fresh perspective on a mix that a single monitoring solution may miss.