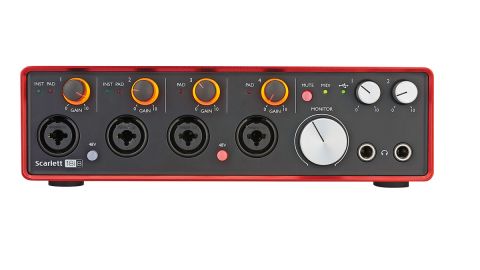 The portable Scarlett 18i8 is the latest of Focusrite's range of audio interfaces to benefit from an overhaul.

So what, you might reasonably ask, is new in this second incarnation of the 18i8? Well, a whole range of things.

Firstly, support for recordings of sample rates up to 192kHz is now provided, while the preamp design has been modified too for higher-quality recordings featuring lower noise and increased gain. This is also true of the instrument inputs which, Focusrite ensures, can now cope with even the loudest guitar recordings.

Perhaps most significantly, there is now compatibility between the 18i8 and the Focusrite Control software, which acts as a bridge between the hardware itself and your computer, allowing you to configure settings including routings and monitor mix set-ups. Notably, Focusrite promises that the new Scarlett interfaces offer the lowest latency performance of any USB interface available today.

The layout of the Scarlett 18i8 remains broadly faithful to its original design. At the front, you'll find four combi inputs, for XLR (mic), Instrument or Line level sources. Each of these features its own gain dial, while phantom power is available in pairs for inputs 1-2 and 3-4. To the right, there's a prominent Monitor dial to control the output level produced from the stereo line outputs (on the rear panel), alongside two independent headphone outputs with their own level dials.

Round the back, you'll find four more line level inputs, S/PDIF In/Out and an Optical input which can carry eight additional channels of digital input (channels 11-18) at 44.1kHz and 48kHz, or four if working at higher sample rates. You'll also find the USB connector on the rear panel, its inclusion here providing both Mac and PC compatibility.

In use, the 18i8 is extremely straightforward, particularly when partnered with the Focusrite Control software. More importantly, however, there's an awful lot of potential connectivity for a device so portable.

In comparison with the sheer amount of input channels, the inclusion of a single stereo output pair may not suit some users (though there is digital output provision, of course) but there's little else here to criticise.

Recording quality is very good, with a clear, open 'Focusrite quality' sound offered via the onboard preamps. The front four channels are easily configured due to each having its own gain dial, while having the option to add an additional eight channels of audio input via digital I/O means that the Scarlett will readily fit into bigger rigs, when required, for more demanding users. In short, there's an awful lot to like here.