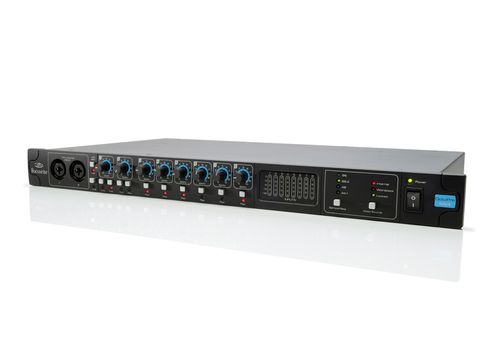 Accurately-priced and even better specified, this is a great update to any ADAT-ready interface.

Focusrite's original OctoPre offered eight high-quality preamps, eight analogue outputs and the option to upgrade the unit to provide digital ADAT output, meaning that you could expand any existing audio recording system as long as you had an audio interface which featured ADAT input.

Now the OctoPre returns in MkII form, with a facelift of both its feature set and its appearance.

As its name suggests, the OctoPre MkII remains an eight-input pre-amp, featuring the same high-quality pres that have featured throughout Focusrite's popular Saffire range of audio interfaces. The first two inputs are provided via the front panel for increased accessibility, while the other six are featured next to the eight analogue outputs on the rear.

Round the back you'll also find the first significant specification update over OctoPre MkI - digital connectivity via ADAT is now included as standard, rather than being available as an expansion option only.

Two solutions are offered depending on the sample rate at which OctoPre MkII is operating. At 44.1 and 48kHz, optical port 1 provides eight digital channels of output, while at 88.2 and 96kHz, ports one and two carry four channels each.

The inclusion of 'digital as standard' is great news for all DAW owners with a spare ADAT port on their interface but will be a boon to Pro Tools users in particular, as the usual hardware/software restrictions are suddenly lifted. Suddenly, eight extra channels of high-quality digital audio are available to you, with the option to clock the OctoPre II to your DAW via wordclock to ensure everything runs in sync.

OctoPre MkII's design update delivers some significant new features too and brings appearance and performance into line with the Saffire Pro 40 in particular. As this unit employs the same preamps as Saffire, using both boxes provides a seamless way to add identical sonic performance across a large number of inputs, while you'll find the control dials and metering 'line up' if you rack this unit above or below a Pro 40.

OctoPre MkI's metering was restrictive to a fault but now you'll find greatly improved ladder LEDs for each channel, as well as -10dB pads on each input too, maximising the unit's impressive potential gain range.

Each input can carry mic and line level sources with the option to switch to hi-Z instrument inputs on channels one and two, while phantom power is provided in two independently switchable blocks of four channels, all from the front panel.

MkII successfully relaunches the OctoPre as a highly desirable unit. So many of us have unused ADAT ports on our interfaces that being able to suddenly capture an additional eight channels of audio via high-quality mic pres and pump those into our computers with no physical 'port loss' will be very attractive, to owners of some Pro Tools hardware in particular.

For live sound engineers this is also a unit to look at closely, as the option to output both analogue and digital feeds means that you can now offer bands the option to provide both live sound and multi-channel recording simultaneously. The OctoPre MkII is versatile and competitively priced, which could prove to be an irresistible combination.