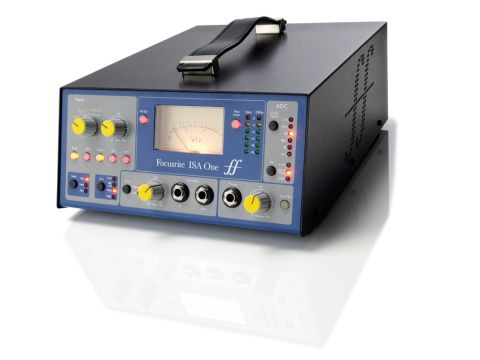 The ISA One oozes quality. It delivers a top sound and top features at a great price.

The ISA One is a single-channel mic preamp (the name's a giveaway, right?). But strangely enough, there's also a separate DI input with its own gain.

As both inputs have their own outputs (XLRs on the back) if you're recording one mic and one DI, the ISA One is effectively a twin input stage. The other big news feature is a built in 'Cue Mix' option.

Now, the ISA One isn't an audio interface, so we're not talking about a complex software-driven system here. However, the front panel phones output points to some form of latency-free monitoring, on which more later.

Focusrite gear always includes plenty of options, and the ISA One is no exception. Top of the list has to be the flexible mic pre, which includes four input impedances (including the original ISA 110 option), phase reverse, high-pass filter and up to 80dB of gain. You'll also find the instrument input includes two impedance options and a DI box-style 'thru' output (labelled as 'amp').

The general layout and metering (including the rather nice VU meter) is also in line with Focusrite's more expensive ISA units.

A look round the back reveals plenty of connectivity, with all main ins and outs available on XLRs, plus balanced TRS jacks for everything else. There are individual send and returns for the insert (rather than the unbalanced single jack option you often see), left and right inputs for the cue mix, a standard TRS line input and an external input for the second channel.

From a technical perspective the ISA One ticks many of the same boxes as other ISA units. The transformer-based mic pre is the same Rupert Neve design found in the original 1980s desk design. Its Lundahl L1538 transformer combined with a bespoke zobel network and massive frequency bandwidth results in a mic pre that's both transparent and warm.

The optional AD card is the same one used in the top of the range ISA 430II. This adds back panel connectors for optical S/PDIF and word clock, with S/PDIF and AES connectors on a 9-pin breakout cable.

To get the most out of the ISA One it's worth taking a little time to understand the signal flow. In addition to the headphone option, we were particularly interested to see how the two separate inputs worked both on their own and in combination with the AD card.

The main mic input is pretty obvious, feeding its own XLR output, channel one of the AD and the main VU meter.

However, using the main input selector you can bring it up the main channel to use the insert point. At this point it also feeds the main VU and LED meter (as well as channel 1 of the AD and the main XLR out). Plugging into the external input jack on the back steals the second channel AD and output from the DI.

The ISA One addresses the typical problem of low-latency monitoring in two ways. First up, there's a pair of TRS jacks on the back for a stereo cue mix feed from your DAW.

Selecting the Cue Mix button on the front panel routes this mix to the headphones and cuts any feed from the input stages. Essentially, it's designed for people who already have a low latency monitoring facility elsewhere in their chain, such as an interface or Pro Tools HD. The ISA One merely lets you access this near to your mic pre - useful but not groundbreaking.

The other option is in mono. With Cue Mix not selected, the headphone feed automatically gets both inputs. However, you can also plug into the external source socket on the back. Unfortunately, this steals the second channel, but does allow you a mono blend of one input plus whatever you feed to the external input. Even so, we wonder why Focusrite didn't simply include a mute in the stereo cue mix, so you could listen to a stereo feed with or without the inputs.

Although functionality is important, anyone buying this unit will want to know how good it sounds. Unsurprisingly, it's excellent.

You get clarity at all frequencies, combined with amazing headroom. So, whether you're pushing it or just experiencing some peaks, the ISA One doesn't sound 'choked'.

The impedance options do enable some fine-tuning, and in addition to level changes, you'll experience frequency response differences too. The instrument impedance option is a nice touch, but we found the more typical 'high' setting to be best suited to our weedy passive bass guitar output.

In typical Focusrite style the ISA One's features and sound take an everyday item and make it much more desirable. The inclusion of a headphones option is interesting, although we think the stereo cue mix should enable you to blend in the input between the two as well.

In terms of price the basic unit is fantastic value. However, for full benefit you'll need the AD card, and that adds another 60% to the cost, which seems steep. But this box will last you years, and represents an extremely wise investment for the project studio owner.