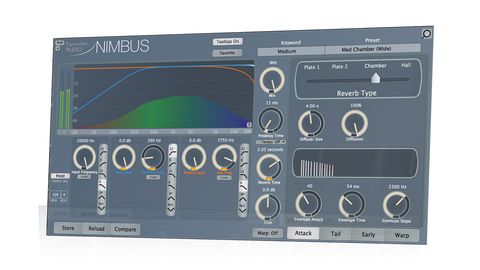 It builds on (though doesn't replace) PhoenixVerb, pursuing the same remit of a natural, unobtrusive-sounding reverb. Nimbus looks very similar to PhoenixVerb, though it's larger and more feature-rich. It's also fully compatible with existing PV presets, and even includes its full preset bank.

First up, there's one new algorithm, making four Reverb Types in total (Plate 1, Plate 2, Chamber and Hall). Next up, there are more adjustable parameters, the most obvious of which is filtering at three stages (Input, Early reflections and reverb Tail) with high-pass, low-pass, band- pass and notch shapes.

Finally, the right-hand side of the interface now has a fourth subpage called Warp, which includes compressor/expander, overdrive and word-size reduction.

Nimbus's Warp page is designed to add some grit and lo-fi edge. First comes a compander, with adjustable Knee shape, Attack, Release and Limiter. The single Compression control makes it easy to shift from compression to expansion, and combined with the Attack and Release you can apply some pretty good dynamic effects.

Next up, Overdrive delivers three flavours (Warm 1, Warm 2 and Crush), with an adjustable Crossover (45Hz to 4kHz) that sets the frequency below which audio passes non-effected. Each option is subtle rather than extreme, but they add richness to the overall effect.

Finally, Word Size (Float to 12-bit) allows you to introduce a little of the converter noise you'd experience with older hardware units. Again, even at the 12-bit setting the effect isn't extreme, but rather adds a further layer of dirt to proceedings. Overall, Warp's effects are subtle but nonetheless creative and perfectly suited to the audiophile nature of Nimbus.

Nimbus has over 1200 categorised presets. Even so, this rather daunting number does incorporate patch variants (dark, light, narrow or wide, for example), so you can grab a suitable preset - Perc Plate, say - and whizz through some close alternatives: Perc Plate Dark, Perc Plate Wide, and so on. With the exception of vocals and percussion, presets are named by type rather than application, but with 27 Keywords (Room, Small Plate, Instrumental, etc), narrowing your search is easy enough.

In terms of sound, the Hall and Chamber algorithms have very similar tonality, with Hall having a more gentle onset. Meanwhile, Plate 2 is narrow and bright, and Plate 1 is wide and dark. With regard to the new early reflection settings, all five are less uniform than the original PhoenixVerb setting, and the new Vintage option in particular, with only a few taps, has the most 'clattery' sound.

With only two controls (Amount and Recovery), Nimbus's Tail Suppression is very easy to use. It's ideal when your source material has gaps - vocals and lead lines, for example - and is at its best with medium to long decays.

Nimbus can deliver a maximum decay time of 249 seconds, so you might think that large spaces are its forte. In fact we really like it for small 'barely there' effects, and the Envelope settings are particularly handy here as you can tailor the onset very accurately. PhoenixVerb, Nimbus also includes a CPU saving adjustable processing threshold (-48dB to -120dB).

Nimbus is one of the most natural-sounding algorithmic reverb plugins on the market, and is ideal for vocals, lead lines, dialogue and anywhere when you need to add space but don't want it to dominate - but it also has some creative tricks up its sleeve, and is wonderfully editable.