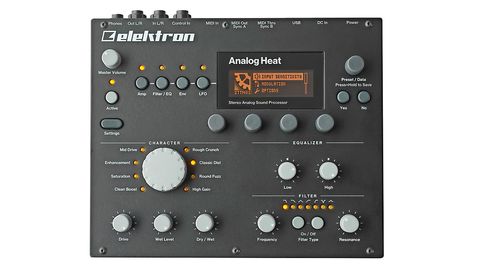 The Analog Heat is a deceptively flexible box of analogue effects that partners perfectly with a modern digital set-up.

After more than 15 years in the hi-tech hardware game, Elektron has released its first effects unit.

Sliding into the brand's 'Analog' range, alongside the Analog Four and Analog Keys synths and Analog RYTM drum machine, Analog Heat is a stereo effects processor pitched as an "audio enhancer and audio destroyer".

At its core, the Heat is a combination distortion, EQ and filter, of which the former section is the star of the show, offering a range of eight different stereo analogue distortion circuits.

Selected via a large rotary to the left of the unit, these circuits are labelled Clean Boost, Saturation, Enhancement, Mid Drive, Rough Crunch, Classic Dist, Round Fuzz and High Gain.

Pleasingly, these eight variations offer a decent amount of sonic variety, both in comparison to one another and within themselves depending on how hard each is 'pushed' using the associated Drive control. Toying with these two parameters alone, it's simple to achieve anything from a nice mid-range 'warmth' to transient destroying fuzz and harsh high gain.

The two-band EQ does a lot to add to the individual character of each distortion type. While the unit offers Low and High cut/boost in all situations, both the base EQ settings and the specific set-up of these controls changes dependant on the distortion circuit selected. For instance, in Clean Boost or Saturation modes the EQ's initialised state is simply a flat line with no cuts or boosts; in Mid Drive mode, however, the EQ always features a low-pass curve, the extremity of which is changed by turning the High cut/boost rotary.

Similarly, in Enhancement mode, increasing the Low rotary adds a general low-shelf boost, yet for the Saturation circuit the same parameter control adds a more precisely targeted frequency boost at around 50Hz.

The filter, meanwhile, can be switched between seven different modes, offering 6dB or 12dB low- and high-pass modes, band-pass, band stop and peak filtering. There are cut-off and resonance dials for shaping the chosen filter type and the filter select buttons double up as an on/off switch for instantly bypassing the filter circuit.

The filter also features a pair of 'hidden' parameters accessed via the screen and settings rotaries. The first of these is frequency pan, which can offset the cutoff point in the left and right stereo channels, the second is an additional drive circuit, which can push the input into the filter, adding extra, subtle distortion.

Beyond these core effects elements, the Heat also features an envelope and an LFO for shaping sounds. The envelope has three modes: Attack/Decay, Attack/Release and Follower. The LFO, meanwhile, offers seven waveshape types, can run in sync'd or unsync'd modes and features a phase control for offsetting the wave's start position.

The unit also has a pair of control input jacks on its rear, which can accept either CV or an expression pedal input. Within the settings menus lies a modulation matrix which allows both the in-built modulation sources and the external control inputs to be routed to a host of different effects parameters (it also allows for many of the LFO and Env parameters to be modulated by these external inputs).

The final step in the Heat's signal flow is a pair of rotaries controlling wet signal level and wet/dry balance. There's also a global Active switch for bypassing the effects entirely, which is handy for quickly A/Bing effects without having to fiddle with your wet/dry configuration.

While the Analog Heat might initially appear to be just a fairly well-spec'd distortion effect, its combination of circuits and the flexible modulation options make it suitable for a broad range of studio applications. With a bit of aggressive drive combined with conservative use of the wet/dry control, the Heat is great for adding pseudo-parallel compression or providing a 'trash channel' for drum mixes.

Routing the LFO to the filter cutoff offset, meanwhile, can create an auto-pan style effect that works great on pads or top lines. Combining the envelope follower and Enhancement or Saturation circuits provides a really nice tool for transient control too, which works particularly nicely for adding a bit of attack bite to kicks and snares. Once you add a bit of external control or some more complex modulation into the mix, it becomes a great tool for adding shape to static sounds.

The Heat is surprisingly intuitive. While many of Elektron's instruments are very highly regarded, they tend to have steep learning curves. But Heat keeps most parameters up-front and accessible.

While there is a certain amount of menu-diving needed for setting up modulation and accessing some less obvious parameters, a collection of clearly labelled page buttons makes navigating the various menus on the backlit LCD screen a fairly straightforward affair. The bank of 128 preset slots comes in handy here too, offering a convenient spectrum of pre-built effects and plenty of space to save your favourite set-ups for easy recall.

It's the Overbridge compatibility that really pushes Heat into the top tier of studio tools though. Around the back the Heat features a stereo pair of 1/4-inch jack inputs, a pair of 1/4-inch jack outs, two 1/4-inch control inputs, MIDI In, MIDI Out and MIDI Thru (the latter two ports doubling up as DIN Sync outputs). There's also a headphone out, power in and USB connection.

Via its USB connection and Elektron's free Overbridge software, the Heat can function as a 2-in/2-out audio interface. Overbridge lets it function as a VST/AU plug-in allowing it to easily process DAW audio complete with in-the-box modulation and automation.

Best of all, it can be a plug-in and interface at once. It's a super convenient, portable and multi-functional tool to pair with a laptop. On-the-go producers will love it!

While it's not the only outboard effect out there to 'play nice' with digital workspaces, Elektron's system is very fluid, and the ability to easily process digital sound while modulating and automating Heat from a DAW creates a really winning synergy between the best of the analogue and digital realms.

The fact that it can function as an audio interface and still operate in plug-in mode at the same time will likely be a big selling point to a certain ilk of on-the-go producer. At over £600, it might seem expensive but, particularly bearing in mind its flexibility, portability and general quality, it easily justifies the outlay.