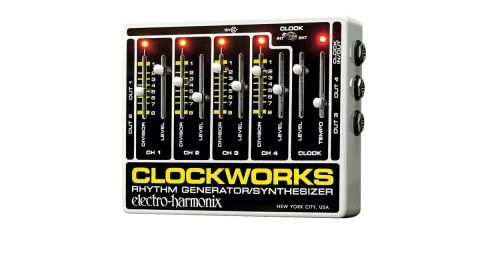 With the rising popularity of analogue synths, this reissue is right on time.

There are certainly plenty of old EHX products we'd all like to see reissued but would we actually use them now?

Well, with the rise of cheap analogue gear and modular synthesis come pulse clocks and control voltages - which means we were very glad to see the reissue of Clockworks, a four-channel clock divider.

The unit itself has all the rugged wherewithal we've come to expect from the NYC FX masters and all functionality is retained from the original. It's fun and super easy to use; dialling in polyrhythms is a doddle.

Channels one to four each feature a Divisor slider ranging from one count per beat up to an eighth and a Level slider for dialling in the sensitivity of the pulse. The master or Clock channel also features level control and a Tempo slider.

The unit can either operate with its own internal clock or externally, so it will slot in with other CV gear easily. Integrating it with more up-to-date set-ups could be slightly problematic as there is no MIDI functionality.

Now, some may say that isn't the point of this little box, but if you definitely need to get connected then pairing it with a MIDI/CV converter such as the EHX 8 Step Program would be the way to go and you still won't be breaking the bank.