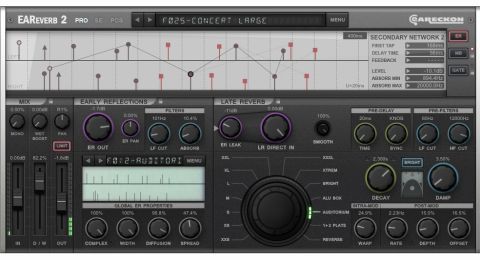 Expanded algorithms, a slicker interface, and the nifty Screen Modules and Pos Mode make EAReverb 2 one of the best algorithmic 'verbs on the market.

Released in 2011, EAReverb was an algorithmic reverb plugin that used one core algorithm to create a choice of nine carefully tailored Late Reverb spaces (XXS to XTREM).

This was combined with an Early Reflection section to deliver a wide variety of natural-sounding spaces and ambiences. The interface was straightforward, with a flip-down panel at the bottom revealing advanced Early Reflection editing, an AHR reverb gate, and a three-band stereo processor for per-band adjustment of stereo width and level.

In Pro Mode (the default state), Early Reflections (ER), Late Reverb (LR) and Mix levels are handled in the bottom half of the screen, with the big central knob accessing the 14 Late Reverb algorithms and spaces.

The ER and LR parameters are similar to version 1, including the very useful ER Leak, which controls how the early reflections interact with the tail. New controls include ER Pan, ER Diffusion and ER Spread, LR Smooth and LR Post Modulation with Rate, Depth and left/right Offset, plus a couple of additional controls for the new Auditorium and Reverse algorithms, which we'll come back to.

The new Screen Modules at the top provide simple adjustment of Gate, Early Reflection and MultiBand parameters. The Early Reflections page proves particularly useful, enabling intuitive graphical adjustment of individual left and right channel reflections. Rather brilliantly, your edited settings can be saved as ER User presets in the main ER section below, too.

In contrast to Pro Mode, SE Mode boils the GUI down to just the essentials, with an even bigger knob for selecting the Late Reverb algorithm/space, and just nine adjustable parameters. This simplification has no bearing on the underlying processing, however, with all settings made in Pro Mode remaining active but inaccessible, and five of the knobs actually controlling multiple parameters, colour coded in Pro Mode for easy identification.

EAReverb 2 includes all of v1's presets in their original folder structure (Classic Space, Ac Guitar, Vocal, Piano and so on), plus new folders for the Plate, Auditorium and Reverse algorithms.

This combination of task-orientated and 'general' presets isn't entirely intuitive, and, with no searchable browser, is the plugin's weakest point. Back on the upside, though, we now have independent preset handling for the ERs, with one ER preset designed to specifically match each algorithm, and, as mentioned above, the ability to save User presets.

Also useful is the new parameter lock function, for loading a new preset while retaining selected settings from the current one (just the Mix settings, for example).

As in v1, the Natural algorithm generates everything from barely-there width (XXS and XS) to expansive, warm decay (XXXL and XTREM). Mid-sized preset favourites from v1
- Studio A and Studio B (which use the L and M Natural spaces respectively) - ably demonstrate the subtle wooden room warmth at which EAReverb excels.

The new Bright and Alu Box algorithms deliver quite extreme processing - the first fizzy shimmer, the second tinny, fluttering resonance. Both will help with special effects design. Plate (the only mono in/stereo out algorithm), meanwhile, captures not only the splashy brightness (Plate Percussions) but also the thick mids that plate reverbs can exhibit (Large Dark).

Auditorium is an altogether more lively algorithm, particularly with its Bright setting switched on. We like its additional Distance control, too, which influences the late reverb width to allow adjustment from near to far. Finally, Reverse gives the classic 'reverb riser' effect (0.05 to 1.5 seconds), with the very welcome inclusion of tempo sync - good thinking, eaReckon.

Further useful new features in EAReverb 2 include Infinite Decay for the Bright, Auditorium and Plate algorithms, a transient detector for the Gate, and two operational modes for the MultiBand Module.

The straightforward Post reverb option simply adjusts levels and mono/stereo width on a band-by-band basis, while the Pre reverb setting splits the signal into wet and dry components, providing level and per-band wet/dry balance, and is intended for when using EAReverb 2 as an insert effect.

eaReckon has come up trumps with EAReverb 2. It is a slightly deeper, different experience to v1 (you may well be thankful for the SE mode), but it retains all the sonic charm and adds in a host of fabulous new sounds and features. Highly recommended.