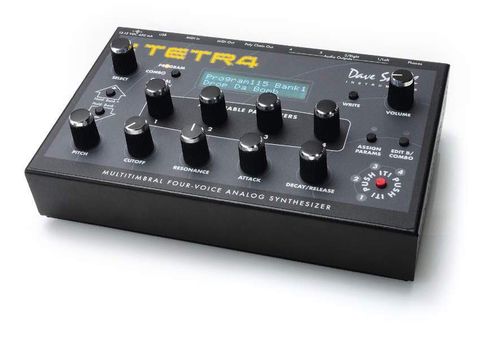 A hugely powerful, fantastic sounding analogue synth at a great price. It's a no brainer.

Fact: Dave Smith is a synth design legend. He designed the Prophet 5, 10, T8, Pro One, and VS under the Sequential Circuits name and also changed the way we all make music forever with his huge contribution to the invention of MIDI itself.

His current company, Dave Smith Instruments, is today one of only a handful of synth manufacturers that still makes truly great analogue synths. The Tetra follows as the souped-up successor to the Mopho monosynth that wowed us last year.

As DSI got the analogue sound engine spot on with the launch of the Prophet 08 back in 2007, it makes sense that it's now filtering down this proven technology into more affordable products.

The Tetra is a two-osc per voice, one low-pass filter per voice, four-note polyphonic/four-part multitimbral synth module that uses the same basic sound architecture (based on digitally controlled analogue oscillators, DCOs) as the Prophet 08. Note that all the Prophet 08's controls map exactly to the Tetra over MIDI.

Tetra can also be chained (using the Polychain output) to a Prophet 08 to make a 12-voice monster or of course you could chain it to a Mopho for a five-voice synth, too. We like this modular capability approach from DSI. Need more voices? Then add a Tetra or Mopho as funds allow.

In the main, four voices are enough, but remember that once you start layering sounds (you can layer split or stack as on the Prophet 08) polyphony is reduced. This isn't a big deal most of the time but it's something to be aware of if you're the sort of player who likes to play monster chords or four-note chords and a bassline.

Build quality feels great and the box feels sturdy enough for gigs as well as for studio use. Tetra looks good, too, and it certainly invites tweaking. The two-line screen is small but never gets too cryptic. The 11 pots on the Tetra feel just like those on the Prophet 08 PE - solid, albeit with a tiny bit of sideward play. This most certainly feels like a quality piece of gear, though.

Tetra packs a lot of connectivity into a small footprint. First up, power comes courtesy of a wall wart (note there is no power switch). Next up is USB, which allows Tetra to be connected directly to your computer without the need for an interface. Of course, normal MIDI In and Out are available too, but USB is much more convenient for bi-directional computer communication, especially when using the free Tetra editor that can be downloaded from here.

The editor is very logical, well laid out and easy to use and it's well worth having for deeper programming needs. It really brings Tetra to life and makes creating complex patches a breeze. There is also a more fully functional ($39.99) editor available that offers patch genetics and morphing, sequencer templates and a bank manager/librarian.

Finally there's the Polychain output, which doubles as a second MIDI Out when not used to chain other DSI synths. Audio outputs include four unbalanced jack outputs, (each one assignable to a voice) and a stereo headphone out. Note though, that the editor cannot be used as a VST or AU plug-in in your DAW.

Eight of the pots are the continuous type that are stepped for accurate setting of parameter values, while the volume pot and filter cutoff and resonance controls are normal pots that stop at each extreme of their travel. These also have a line on them so you know where your sound is set at a glance.

This is a huge improvement from the Mopho, which had both its cutoff and res as continuous stepped rotaries - sometimes the stepping was even audible. The Mopho's rotaries also lacked acceleration so you couldn't accurately 'pulse' sweeps in time to the beat. Thankfully, this has been fixed for the Tetra.

Beneath the display are the main sound shaping controls. There are four pots that can be assigned to any parameter and five hardwired pots for those main tweakable performance parameters (from left to right: Pitch, Filter Cutoff, Filter Resonance, Attack and Decay/Release).

In general, these have been well selected, but there have had to be a few compromises for space/cost reasons, the main one being that the Attack, Pitch and Decay Release controls all control several parameters at once. For example the Attack dial controls filter attack, amp attack and env 3 attack at the same time.

However there is an easy workaround, which is to assign parameters that you'd like to have independent control of to one or more of the assignable controllers. DSI advises using the free editing software for deeper programming and setting up your favourite parameter assignments prior to live performance, which makes complete sense.

Thankfully, assigning one of the many parameters (well over 100) to the assignable pots is very easy. Hit the Assign Params button, scroll through the parameters until you find the one you want to assign, hit the Assign Params button again and then tweak away. The endless rotaries can sometimes take a couple of turns to sweep the full range of parameters, which could be a pro or a con depending on how you intend to use it.

Selecting sounds is a breeze too - press the program/combo/global button and use the select dial to step through sounds (or the + and - controls). The four banks of 128 sounds are changed by holding these + or - controls for a second or so.

By now you're probably wondering if there are any differences in basic functionality between Tetra and the P08, and there are a few notable ones. Apart from four notes fewer on the polyphony front, Tetra has the sub oscs from the Mopho that really help nail those deep basses that some polysynths sometimes have a hard time creating.

Also, there's a feedback function, which is tantamount to feeding the audio output back into the signal path for thickening and dirtying up sounds. This works like a dream and enables the creation of harmonically rich and twisted textures, taking this box to another level sonically. Both these features are missing from the P08 but we hope they might be included some day!

While on the subject of audio routing, there is no physical space for an external audio input. However, there are some nice features onboard Tetra that neither the P08 or Mopho have, including MIDI over USB and four-part multitimbrality, (as opposed to no USB and two-part multitimbrality on the Prophet 08).

The combo/multi-mode mode makes good use of the Tetra's multitimbral capability and allows four mono sounds to be stacked in unison for hugely powerful leads and basses, four sounds to be stacked polyphonically, or four different sounds and their sequences to be accessed/ played at once, via the 'Push It' button or via a key on your controller keyboard. This opens up all sorts of new sonic and external control possibilities and means Tetra can integrate easily with all types of MIDI setups.

Tetra's modulation routings are versatile and plentiful. There are over 20 modulation sources and over 40 modulation destinations. Coupled with four LFOs, an assignable third envelope and a noise generator there's certainly plenty to keep even the most discerning programmers busy.

The easiest way to set up the modulation routings is via the software editor. Our general advice with Tetra is to do all deep editing via the editor and just enjoy using the controls on the front panel for basic live performance tweaks of key parameters (filter, LFO, amp etc).

The graphical sequencer interface within the editor helps speed up sequence creation no end. Tetra has four 16-step gated sequencers on board (like the Prophet 08). These sequences can be triggered via your MIDI controller of choice or via the Push It trigger button on Tetra's front panel.

Either way, the sequencer is a great addition, not just for note sequencing but also for creating time-based modulation effects. The arpeggiator, while basic, works well and can be synced to MIDI, too.

Downsides are few and far between (no power switch, the editor is needed for real deep programming and no audio input) but sonically there is nothing to fault here. The Tetra is every bit as great sounding as its forefather the P08.

The filter is wide, juicy and can be smooth or aggressive depending on whether 2- or 4-pole mode is selected. It also self oscillates smoothly at high settings in 4-pole mode but can scream too, and the 2-pole mode is classy and great for brassy sounds and more besides.

Tetra has the exact same sonic character as the P08 with sizzling tops, full and punchy mids and thick powerful lows (and with the additional sub oscs even more lows now). Sonically speaking, the P08 is one of our favourite polysynths, so it follows that Tetra is too.

At just over £550 (dollars to pound conversion) Tetra is an absolute bargain and deserves to fly off the shelves in droves. DSI has done it again.

Take a listen to Tetra in action: