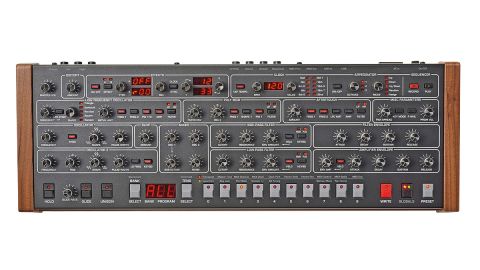 We first reviewed the Prophet-6 keyboard back in September 2015 and were seriously impressed.

Since then, we've employed it on numerous productions where its high-quality sound has really come into its own. We've been using it for general polysynth duties such as warm pads and '80s-style brass poly sounds (which it excels at due to its very upfront and punchy character, with plenty of high-mid presence and high-end sizzle), but we've also employed it for various mono duties - it can do very authentic, searing Minimoog-style leads and snappy, growling basses (the envelopes are very punchy, allowing sounds to cut like a knife).

Classic poly sounds are the P6's forté but that would be belittling its scope - it's capable of going way beyond this.

To recap, the Sequential-badged Prophet-6 is basically a Prophet-5 made for the now, with an extra VCO (six instead of five voices), improved oscillator stability, the addition of a triangle sub oscillator, Slop (to dial in the randomness found in older analogues), a resonant 12dB HPF (in addition to the classic 24dB/4-pole LPF), two digital FX engines (with true bypass), an expanded 'polymod' section (polyphonic modulation, where modulation changes polyphonically) a transposable poly-sequencer and arpeggiator, plus comprehensive MIDI implementation.

The ethos with the P6 is putting all the sound-shaping power directly under your fingertips, so pretty much every function has a dedicated knob/switch and there are no menus - just a basic three-digit LED to display patch numbers and various global functions. The P6 is a no-nonsense premium-sounding performance synth and already widely respected as a legit successor to the Prophet-5.

The most important thing is that the sound is still hugely inspiring and engaging and few other current synths can touch its upfront, clear-cut yet earthy sound! The quality of the oscs is right up there with the best and it's rich, creamy, gooey, sizzly and deep with virtually no background noise in the signal path.

Warm-up time is fast and tuning very stable once you've calibrated the oscs a few times in different temperatures. The envelopes are punchy and very detailed sounding and the effects transform the sounds beautifully, placing them into many varied, yet always musically relevant contexts.

Build quality is holding up great with everything still feeling and looking like new and DSI have also updated the OS regularly, with the latest update bringing several new velocity curves which have improved playability greatly.

The 'downsides' we've found are minor. Firstly, detuning via the Osc 2 fine-tune dial (and Slop) sounds too controlled for our liking - almost like the OS is pulling the tuning in too much and we'd like this loosened up a bit (as it has been on the OB-6), especially as the first few mms of travel on the Osc 2 detune dial don't really do much, resulting in an 'all or nothing' type of detuning (we'd really like some more subtle range on that dial).

Next up, as we mentioned in the original review, while we love the complete lack of menu diving (for gigging especially), having such a basic display is sometimes frustrating (ie, no patch naming). Yes there's direct patch access (ten patches in front of you at any one time) but it's still hard keeping track of your presets by number, though obviously this isn't going to be getting changed as it's a hardware limitation.

Further, since the P6 launched, other analogue polys have entered the market with more comprehensive mod facilities, so the P6 does look a little basic in terms of modulation facilities/control, especially considering its price.

For example, you can't control effects via a mod wheel, aftertouch or a pedal (as you can on the upcoming Behringer DeepMind 12 or on a Roland JD-XA); and a dedicated assignable second LFO is also something we wish the P6 had (I use this a lot on my JD-XA).

Perhaps DSI could designate pitch wheel as another assignable source for controlling the effects or filter while still controlling the LFO depth from the mod wheel? Thankfully, the Polymod and X-Mod sections (on the P6M and OB-6M respectively) really help to take your sounds into other-worldly territory.

The P6 does what it says on the box! It's quite literally the P6 without the keyboard, made for desktop use, so the sound and all onboard facilities are 1:1 matched with the keyboard version(s), except for no wheels or keyboard!

The build quality is universally high, with metal chassis/panel, solid dials/switches and wooden end cheeks. Having a desktop version obviously takes up a lot less space than the keyboard version (though the unit itself is still pretty sizeable) and it's a lot more portable too, so more viable for travelling/touring.

One of the biggest appeals of this new module (apart from the size and price) is the ability for existing Prophet-6 owners to add a further six voices easily with just a MIDI cable. This is a significant extra expense but once you hear a 12-voice Prophet-6 it's very hard not to cave in if you have the cash and, if not, once you've had a taste you might have to sell something else to fund it!

To set up a P6 with the module version, connect the keyboard's MIDI out to MIDI in on the module, set the keyboard mode to BTH for layering or PLY (poly) for poly-chaining and you're set (just be sure to match your patches on each unit first). All voices will be divided up smoothly between the keyboard/ module.

The only downside is that the module is frustratingly just over an inch too wide to rack mount, even with the wood ends removed. We guess it would have meant making completely new internal boards and moving the connections (which would have bumped the cost even more).

To conclude, after testing extensively, for us the Prophet has proven to be mouldable and versatile. There's very little to fault here and this module will have you grinning from ear to ear like a Cheshire cat. Great stuff again!