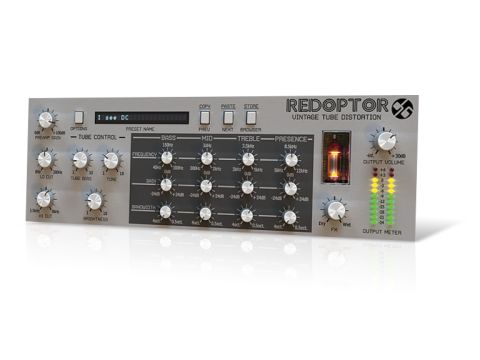 Unless you're planning to use it only on guitars, hang on for the update, we say.

It made its name with dead-on emulations of vintage Roland techno boxes, but there's more to D16 Group than just acid synths and stomping drum machines.

Indeed, over the past year or so, the company has introduced its Silver Line of high-quality, low-cost plug-in effects. The latest, Redoptor, is billed as a "vintage tube distortion", and is said to have been modelled on guitar amp circuitry.

It emulates the preamp stage only so, to use it for guitars, you're best to use it in conjunction with other plug-ins - eg, a cabinet simulator - otherwise it'll sound too harsh when pushed hard (as a real guitar preamp would if you DI'ed it!).

Oh, and Redoptor works in stereo, too.

The signal path starts with the tube preamp stage. This has more controls than most valve-apeing effects. You can drive the incoming signal by up to 100dB, before it runs through a high-pass then a low-pass filter.

The former ranges from 0Hz to 3kHz, while the latter goes from 1.5kHz but tops out at only 8kHz. And even if you set the high-pass to 0Hz, the bass is curtailed.

In other words, any signal passed through Redoptor is filtered, which is OK for guitars, but often undesirable for other signals. We'd like to see a bypass option and larger ranges for the filters in an update.

The Tube Bias parameter dictates the amplitude of the odd harmonics introduced - it's a very subtle effect that's most noticeable when processing simple tones. Brightness is likened to offering a transition from valve overdrive to harder diode-style clipping.

Finally, Tone sets the balance between the direct tube-processed signal and a high-pass-filtered version.

The preamp stage is followed by a four-band parametric EQ (frequency, gain, Q) for further shaping of the signal. Obvious uses for the EQ would be to approximate a speaker simulation (eg, by shearing off the treble) or to somewhat compensate for the preamp's filtering antics.

D16 previously proved its crunch credentials with the delightful Devastor multiband distortion, and Redoptor sounds every bit as good as we've come to expect from the company.

To test Redoptor with guitars, we placed it in front of Overloud's TH1 (used only for its speaker simulation). A range of tones was possible, from clean funk to 'just breaking up' vintage blues tones through full-on rock.

Despite the filtering frustrations outlined above, we enjoyed Redoptor on non-guitar signals, too. Subtle enhancements can be had by zoning in on a frequency range with the filtering knobs, dialling in just enough gain to warm the sound up without making it obviously distorted, then setting the dry/wet mix knob to impart some of this new-found warmth to the signal.

SIn short, Redoptor sounds excellent on all manner of signals, and seems to offer a smoother transition from clean to distorted than many plug-ins of this type.

It's just a shame that, as a general purpose valve distortion, those filters literally take the edge off proceedings. D16 reckons that it'll be rectifying the situation in a future update, which should see Redoptor unleashing it's full potential.

As far as guitars go, if you're not quite satisfied with the valve tones of your current software, you could buy Redoptor to use in conjunction with it, as a preamp. Alternatively, you could partner up Redoptor with an amp/cab sim such as Voxengo's free Boogex to make an affordable yet very convincing setup.

Listen to Redoptor being applied to a guitar, electronic drums and real drums: