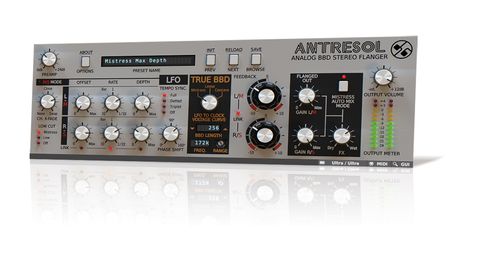 A modern reimagining of a legendary flanger, Antresol is a must-buy for all lovers of high-quality classic effects.

First released in 1976, Electro Harmonix' Electric Mistress guitar pedal (and variants) is one of the most ubiquitous effects of the last four decades, and now we can bring her undeniable charms to our VST/AU/AAX hosts thanks to D16's new plugin version of it.

Like the original, Antresol's distinctively rich flanging effect is generated by modulating the time offset of a delay feedback loop with an LFO, which has an intentional knock-on effect on the depth, as we'll explain shortly.

In the original, all of this was controlled by three simple controls - Rate, Range and Colour - and in Antresol, these have been renamed and supplemented with further parameters. The plugin can also be configured for strict emulation of the original, though, for authenticity.

The preamp level control comes first, followed by the L-R/Mid-Side mode selector. Next, the channel crosstalk control (Ch. X-Fade) ranges from 0%, for total separation of left and right channels, through Clone (50%, mono-ising the plugin, like the hardware), to 100%, which swaps the left and right channels. In M-S mode, Ch. X-Fade allows for interesting recombinations of the Mid and Side signals before they're subsequently flanged separately.

The LFO controls comprise Offset, Rate and Depth, and the Rate can be set freely from 0.02 to 40Hz, or synced to host tempo, with Dotted and Triplet options.

Just like the Electric Mistress, increasing the Rate applies a minute relative reduction to the Depth - one of the nuances that characterises the original's sound. Phase Shift can also be adjusted between the left and right channels, from 0-180 degrees.

At the heart of Antresol is the True BBD section. BBD stands for 'bucket brigade device', a type of analogue delay line chip widely employed in guitar pedals from the 70s onwards.

In the BBD circuit, the analogue audio signal is passed through a series of capacitors, each establishing a certain amount of time delay. Three parameters customise its action in Antresol: delay buffer Length, LFO to Clock Voltage Curve, and Range, which adjusts the clock frequency and thus the delay times.

Next come controls for the L-R/M-S Feedback levels, and a bass-taming low-cut filter in the feedback circuit with three settings: Off, Mistress (cuts below 100Hz) and Low (cuts below 50Hz).

The FX section is effectively a mixer for the levels of the L-R/M-S flanged outputs, plus a global wet/dry control. Here, you can also switch the plugin to Mistress Auto Mix mode, which applies a hidden input filter and configures the wet and dry signal balance to accurately emulate the original hardware. Finally, there's an output level control with a large LED meter for visual feedback.

It's hard to put into words just how lush Antresol sounds, especially in High Quality mode (which is admirably un-taxing on the host CPU).

It's versatile, too, delivering everything from huge, evocative sweeps and authentically analogue warmers to chart-smashing stereo wideners and mid/side boosters - and there are 78 presets of unfailing quality and variety included to get you started.

It also looks gorgeous, and the ability to increase the GUI size makes it very comfortable to program.Antresol is a triumph of plugin conception and design at a price that can't be disputed.