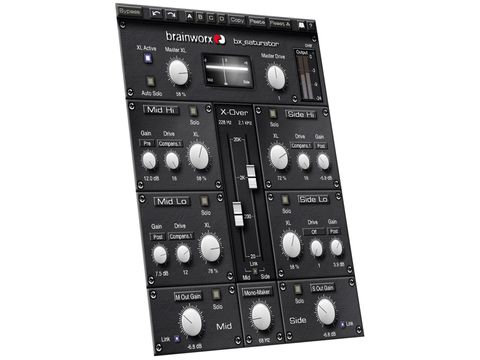 An excellent processor that, quite simply, makes things sound bigger and better.

Distortion has been synonymous with the sound of recorded music since the very start.

Engineers and musicians have constantly pushed the boundaries by finding new ways to distort, either subtly or otherwise. Any tool that enables us to take it in a new direction has to be taken seriously, especially when it comes from an innovative team like Brainworx.

The bx_saturator, like all Brainworx plugs, splits a stereo signal into mid and side. These two bands are then split again into hi and lo sections, each with a gain control which can be set pre- or post-processing, a drive control which can be set to two types of saturation and an XL control, which balances between the affected and non-affected signal.

You can set the crossover point between the hi and lo separately for the mid and side signals, and there are master controls for drive and XL, plus the obligatory Brainworx Mono Maker which monos everything below the frequency it's set at.

Each part of the signal path is switchable in and out and there are separate master level controls for the mid and side components, which can be ganged together to control overall level. The saturator is designed to work with pretty much any signal, from a simple acoustic guitar to a full mix.

When used subtly, distortion brings out quieter harmonic parts adding colour and depth, but it's the subtle aspect that is hard to control. Often you want to bring out some upper harmonics without affecting the fundamentals.

Putting the sound through a straight distortion can get you part of the way but it's the more powerful lower harmonics that dictate when the distortion kicks in and that can make the overall effect too much.

Splitting the sound into upper and lower bands, and being able to say at exactly which frequency that happens, enables you to pull out the harmonics in the upper area to add some vibrancy and colour, while applying little or no distortion to the fundamentals. Add to that the ability to do that as a mid and side process and you have incredible control over not only how the harmonic structure is changed but also of the stereo image it creates.

On acoustic sources such as guitar and piano it's possible to add brightness and attack with a harmonic richness that the original recording just doesn't show, and you really start to hear the space around drums and percussion. Alter the balance between the affected and non-affected signal with the XL control and you can breathe life into a dull sound or, with more extreme settings, radically change its character.

The effect on synths, loops and samples is equally impressive. From adding edge to a bassline, to turning beats into savage beasts, the saturator brings depth and excitement. Add to that the ability to manipulate the stereo image and this plug can make things seriously fat.

If you like your sounds big and bold then this is certainly one processor you can't afford to miss.