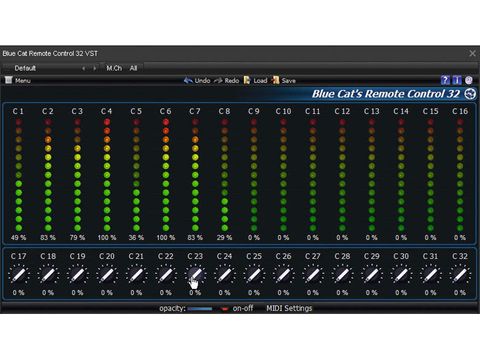 Remote Control 2.0 is a bit of a niche product, but for those who do need to unify their MIDI-manipulating activities, it could be a real lifesaver.

For the past 25 years, MIDI has provided electronic musicians with a means by which the various elements of their rigs can communicate. However, managing a complex MIDI setup requires patience and a fair bit of knowledge.

Software developers make the job easier with things like MIDI Learn, but this doesn't mean that each piece of gear will respond to the same commands in the same way. How many times have you reached for a knob on your MIDI controller, only to find that the selected plug-in didn't actually recognise the MIDI CC it was assigned to?

Remote Control 2 is a bundle of VST/DirectX plugs for PC that offers a sort of control centre from which MIDI data can be routed and shaped into the form that you need. It does, in fact, comprise three plug-ins, capable of managing 16, 32 and 64 parameters, but thanks to a variety of skins that change the way you can interact with them, there are meters, knobs, faders and joysticks with X/Y controls on tap.

As well as controlling practically any MIDI device - hard or soft - there's also a skin that enables you to monitor incoming MIDI signals as a continuously-plotted graph.

Any of the controls can be governed by a MIDI CC on any MIDI channel, and routed to any CC/channel combination. You can even alter the response curves en route. For example, if you have a hardware MIDI controller, you could reassign one of its knobs to control a virtual synth's parameter that's bound to a different CC.

Furthermore, if you'd like to change the physical knob's linear response to a 'faster' curve before it hits the target, Remote Control 2 enables you to do exactly that. You can select and assign MIDI CCs manually, or using RC2's MIDI Learn functions.

Does it work? Indeed it does, but you might find Remote Control 2 a little confusing at first. However, there are some online tutorials to get you going. One thing to bear in mind is that the plug-ins are used as instruments, so your host will need to be able to receive MIDI from instruments in order for you to be able to send signals on. Most hosts can do this, but you'd best check that the demos work with yours before investing in the software.

Remote Control 2 isn't going to be for everyone - the casual MIDI user isn't likely to feel the need for a cohesive, common virtual control surface. However, those who need to reign in sizeable hardware and software collections may find it a vital tool.

It has creative uses beyond the utilitarian, too. For example, one could create huge sounds by stacking instruments and effects and controlling selected parameters simultaneously.

Unfortunately, Remote Control 2 doesn't support remapping of MIDI Program Change commands, but the developer tells us that this may be added with a future update.

Remote Control 2 does what it says on the tin, and does it well, all for a reasonable price. If you're reading this and wondering why you'd need it, then you probably don't need it, but everyone else will find it money well spent.