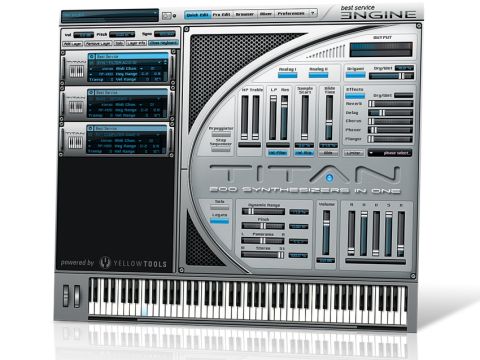 For a massive feast of meat-and-potatoes synth and keyboard sounds, Titan satisfies.

Titan is a ROMpler that lives up to its name, featuring 5500 multisampled patches from 200 synths (alas, there's no list of exactly which synths, though). It's powered by Best Service's sample player, Engine, created in partnership with Yellow Tools.

Installation is awkward, with three stages, and we had to install the Yellow Tools Key Manager before Titan would run (even though it doesn't use a dongle), which the manual doesn't explain. Thankfully, the software is easy to use and the patches well organised.

The main categories are Synths, Basses, Pads, Voices, Pianos, Organs, Brass, Guitars, Percussion Sounds and Effects, and these are further subdivided. For Synth, there's Bells, Filter, Atmospheric, Leads, Brutal and so on. Pop open the Leads folder and they're further broken down into 18 sub-types!

Despite the mass of content, there's little from the last decade or so in electronic music - DnB basses, trance supersaws and dubstep wobbles are absent. To be fair, Titan doesn't claim to offer them, but it still seems a missed opportunity.

Within its remit of '70s, '80s and '90s tones, though, Titan is comprehensive. Synths are the main fare, and whether you're after classic analogue, zingin' sync, gritty digital, vintage string synth, punchy wavetable or crystalline FM, you'll no doubt find it if you keep flicking through the patches (which rarely take more than a second to load). Patches respond to the mod wheel and many have been sampled with filter movement, for added authenticity.

"Despite the mass of content, there's little from the last decade or so in electronic music - DnB basses, trance supersaws and dubstep wobbles are absent."

The 778 bass sounds are mainly synth-based, but you get 40 of the electric, slap, fretless and upright varieties. Note that the 'real' instruments in Titan are of the 'workstation' variety and thus often unashamedly artificial-sounding. The pads cover both smooth yet juicy analogue and glassy, breathy digital - you even get strings.

The Voices folder ranges from singing synths and vocoders to choirs, while Pianos harbours groovy Clavinets, slick Rhodes, workstation grands and electric pianos. The organs are varied, while brass ranges from '80s pop horns to parping synth brass. Guitars are unrealistic, but there are some pleasant plucked efforts; and we liked the percussion section's vibraphones.

Sonically, Titan is very professional, and much care and effort clearly went into making it. While it's not as tweakable as a soft synth, Titan's advantage is that it's sampled from the kind of classic hardware that many of them aspire to sound like. If you play too high up the keyboard, though, you may encounter aliasing, as you leave the patch's 'natural' range (of which no indication is given).

Titan would be just a bunch of samples without Engine to tie it all together. With a patch loaded up, you can use the custom Titan Quick Edit page to access the most common controls: high-/low-pass filters, effects levels (reverb, delay, chorus, phaser, flanger), amplitude AHDSR, and more. There's a slider to adjust the sample start position (useful for patches with sampled filter movement) and this can be modulated by velocity or randomised with the Analog I button (Analog II gives random pitch drift).

Patches (layers) can be stacked to create layered multis, and in the Pro Edit screen you can program detailed modulation and effects setups. There are over 40 effects, and Engine can even host VST effects - you can load VST instruments in as layers, too. There's a heck of a lot more to it; our only real complaint with Engine is that the Pro Edit screen's angular font is hard to take in.

Titan won't dazzle you with reverb-laden one-finger wonders, and it can sound reserved when compared to some ROMplers. However, as a high-quality source of bread-and-butter patches, it fulfils its role admirably, and the Engine interface offers plenty of potential for layering and effecting the sounds yourself.

Listen to what Titan can do: