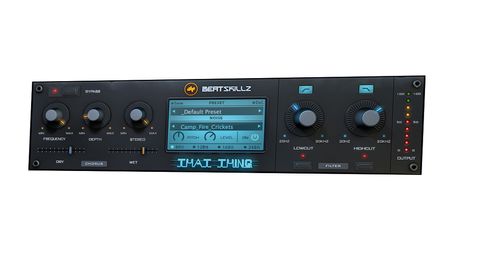 It falls short of its stated brief, and there's a whopping great filter bug, but this is still a fun and creative plugin at heart.

Coded by AudioThing's Carlo Castellano, the second release, That Thing (VST/AU/AAX), is meant to replace "that" sound of analogue and early digital gear that is missing from today's "digitally perfect tracks". In order to do this, it incorporates four distinct editable processes.

First is no-frills chorusing, offering Frequency, Depth and Stereo (width) dials for the main parameters, plus individual Dry and Wet sliders. It's basic, and we're not quite sure what it has to do with "that" sound, but it is effective, delivering everything from vocal thickening to synth widening, and sounds rather nice.

Next up is a sample player for adding a layer of preset atmosphere. This is a strange but actually mildly inspired addition, playing one from a selection of 50 ambience samples in a loop, with the expected likes of tape hiss and vinyl crackle sitting alongside esoteric sounds like windchimes and crickets chirping by a campfire.

Aimed at capturing the enduringly fashionable bitcrushed sound of 80s and 90s hardware, four bit-depth buttons come next: 8-, 12-, 16- and 24-bit. These aren't the most accurate sonic recreations, but when engaged, they each have a usefully distinct sound, adding sonic degradation and an increasing amount of compression as the bit-rate drops, so that 8-bit sounds noticeably louder than 24-bit.

Last in the chain are high-and low-cut filters, but thanks to a rather critical bug, it's hard to be sure exactly what they're doing. In short, both of them bleed dry signal!

We contacted Beatskillz about this in October and the company eventually acknowledged the problem and promised a December fix. Bizarrely, it suggested that it's not a major issue, telling us that "analogue gear also has its defects like crosstalk". But if an analogue filter circuit bled -24dB of dry signal level straight through in parallel with the wet output, like That Thing's do, it wouldn't be considered quirky or nuanced - it would be considered broken. We can't, therefore, make any meaningful assessment of the filters.

We can tell you, however, that the slopes are quite shallow. For example, when the low-cut filter is engaged at its lowest setting (20Hz), there's a 2dB dip as high as 100Hz. Interestingly, this works well at the top end, as engaging the high cut filter rolls off some of the painful sibilant highs, often making the signal a bit nicer and smoother just by dint of being engaged.

Like Slam Dawg, That Thing falls rather short of its stated aim but nevertheless offers plenty of musical functionality. Considering the four very simple processes on offer, it manages to produce a surprisingly wide range of effects, and there's a healthy supply of 50 presets included to showcase its potential.

What's more, each process can be used on its own, further expanding its usefulness. Obviously, we recommend waiting for the forthcoming filter "crosstalk" fix, but once that's in place, and despite the baffling and unprecedented apparent indifference to obvious bugs, Beatskillz' new plugin will be worth a look.