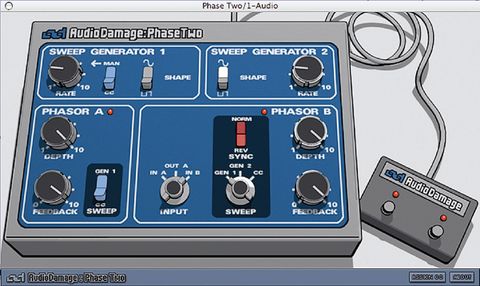 An awesome blast from the past - Phase Two is one of the best phasers money can buy.

Audio Damage's most direct reproduction yet, Phase Two is pretty much an exact software replica of Mutron's legendary and highly sought after Bi-Phase dual phaser pedal from 1977. If you've ever used the original you won't even need the manual, as the cel-shaded interface mirrors the hardware almost perfectly.

Each of Phase Two's independent six-stage phase shifters has its own Sweep Generator with a range of 0.1Hz to 20Hz. Both sport Rate knobs for setting the speed of the sweeps and Generator 1 can also be switched to CC mode, whereby its rate becomes MIDI controlled using a CC number 'learnt' using the Assign CC button at the very bottom of the interface.

The behaviour of the Rate knobs at their lowest settings is the only operational difference between Phase Two and the Bi-Phase: Audio Damage have scaled them to cover a wider range than the originals for more control over very slow sweep rates.

The sweep modulation of both Generators can be switched between the misshapen square and triangle waves of the original with the Shape switches, while the frequency range of the sweep is controlled with the Depth knobs.

Both can alternatively hand control of the sweep over to the aforementioned MIDI CC in CC mode, while Phasor B can also be set to respond to Generator 1 rather than 2. If you're after really bubbly phasing, you'll be wanting the two Feedback knobs, which dial in increasingly zingy resonance.

Phase Two can accept mono or stereo signals. With stereo input, Phasor A always receives input from the left-hand channel and outputs it on the left-hand side, but Phasor B is a bit more complicated.

Last but not least, with both phasers set to the same sweep source, the Sync switch enables you to reverse the sweep direction of Phasor B in relation to A, rather than have them moving together in the same direction. For example - as A sweeps upwards in the left channel, B sweeps downwards in the right.

Given that it's near as dammit a clone of the Bi-Phase, Phase Two sounds beautiful - it's rich, smooth, gorgeously fluid and mobile. Drums and guitars are obvious fodder, but vocals, synths and strings also work a treat, whether you're after a touch of subtle motion or the full-on psychedelic deal.

There's really nothing of consequence to sour the deal - oddly, the legending appears to be slightly out of focus, but that doesn't hurt what is in every respect yet another triumph from the US plug-in developer.