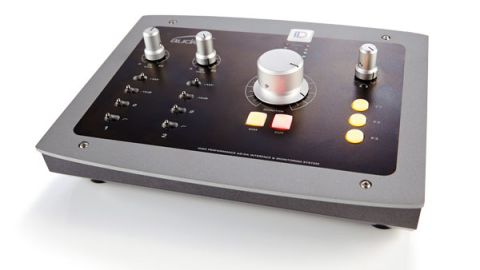 Audient's ID22 is a 10-in, 14-out desktop audio interface with AD/DA converters that supply two mic preamps and six analogue outputs.

One of the microphone preamps also doubles up as a DI instrument input, perfect for recording guitar or bass.

A nice touch here is that there are also four insert points which allow you to integrate hardware processors. Two mono or a single stereo device can be hooked up, giving you a good degree of flexibility.

The considerable spread of inputs and outputs doesn't stop there either; four analogue outputs, ADAT in and out and a dedicated headphone output tie things up nicely.

The ability to run two sets of monitors from the outputs makes this a monitor controller as well as a fully-featured recording interface.

Add to this the fact that the ADAT ports can be used to expand the ID22's connectivity and its small form factor suddenly seems pretty deceiving.

Control of all these outputs is split between the front panel and the supplied software. The layout of the controls on the whole is very well thought out; everything is where you would expect it to be and easily located. There is plenty of space between controls and the milled aluminium knobs feel extremely sturdy.

Although the switches feel solid, they are very short and fiddly to operate. This may prove frustrating in a busy recording session.

Another very minor build gripe is that the metal top panel has been quite roughly cut and feels a little sharp around its outer edges. These could have been chamfered for a more forgiving finish, however otherwise the build quality is excellent.

All this aside, the most important aspect of an audio interface has to be how it sounds. Thankfully, the ID22 performs flawlessly in this department. Audient's vast experience clearly pays off here.

The combination of great sounding mic preamps and crystal clear converters delivers not only a superb monitoring experience but also a pristine front-end for recording.

The ID22 really is right up there with the best interfaces for fidelity.