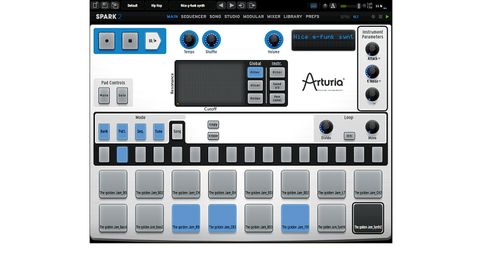 The already-popular virtual drum machine just got much better, particularly with the addition of its excellent new Modular system.

When the Arturia Spark hardware/software Spark drum machine first launched in 2011, we gave it a decidedly lacklustre review.

The software and sound library showed promise, but the hardware failed to impress. Last year's SparkLE hardware and subsequent software point releases and soundbank updates really turned things around, though, so it's with some excitement that we find ourselves squaring up to Spark 2.

Fully compatible with both the (discontinued) original and LE hardware, Spark 2 offers vastly improved sequencing and song modes, a completely overhauled interface, expanded REX support and, most intriguingly, an entirely new modular sound design engine and interface with which to design and process your own sampled or synthesised percussion and instrument noises.

It's important to note that the SparkLE hardware remains unchanged (indeed, you can buy and run Spark without it), so we're only reviewing the software here.

Before we start, let's have a quick recap. Spark is a hybrid MIDI controller and software instrument (VST/AU/AAX/standalone). It draws on a combination of sample playback and synthesis to present over 30 classic drum machine emulations and a large number of genre-specific and original kits.

The classic drum machine kits have always been excellent, the original electronic kits good and the 'real' kits below par, and all of them are triggered and controlled either by your DAW or the software's internal sequencer. So, what's changed?

Most obviously, the GUI has been quite brilliantly overhauled. It looks much better, and where there were previously three pages (Project, Kit and Instrument), there are now eight.

The first is Main, which mirrors your connected Spark hardware (we're using SparkLE here) with slight improvements on the previous verison (nicer graphics and helpful drum descriptions on the pads). Next is Sequencer, which has also been enhanced, both visually and functionally, making programming automation (of pad and effects parameters) much easier than before.

The Song page is a huge step forward. It enables you to string patterns together in chains, 16 of which can be triggered from the drum pads, facilitating complicated and genuinely spontaneous live arrangement. You can also set these chains to run sequentially from one to the next, for quick song construction.

The Studio page is where drum kits are constructed, giving access to a choice of synthesis, samples and REX file import for each pad. Although functionally similar to previous versions, it's visually much clearer now, and the refinement of REX file support is very welcome indeed, letting you trigger the single slices of a REX file (forward or reversed) or the whole loop, complete with basic envelope and pitch controls (although only for the entire loop, not per slice).

It doesn't, however, automap REX files across the 16 pads. We know this would mean an upper limit of 16 slices, but it would be useful nonetheless.

The Modular page is without doubt Spark 2's most exciting new feature, giving you a set of tools with which to create entirely new sounds - see Modular must-have.

The Mixer is largely unchanged from the previous version, but is - again - a little nicer to look at, while Library is now far more usable. Using the old version was a little like selecting tracks on a CD jukebox, but now everything is much clearer, and helped along by a search filter like that in Arturia's Analog Factory.

Finally, Preferences houses a range of options, including Shuffle type (triplet or dotted), export settings (audio and MIDI files can be dragged and dropped out of Spark into your DAW or OS), record quantise and more.

Those are the headlines, then, but it wouldn't be a full version update without some new content, so Spark 2 introduces over 50 new kits and associated patterns (Projects).

As you would expect, many of these take advantage of the new Modular system, but nonetheless, Spark still suffers from the same problem as previous versions in this department: the kits are better than the patterns, particularly when it comes to the genre-specific stuff.

Granted, you shouldn't be buying a programmable drum machine on the basis of its preset patterns, but if Arturia is going to include them, they might as well be properly representative.

On the whole, Spark 2 is a really solid update, but there are a few things that we're quite surprised to not see added to the feature list. The first is a note repeat function: whether you make EDM, deep house or techno, current production trends are making this two-decade old concept a modern studio standard.

And speaking of old-school features, unlike Akai's flagship MPC Software and NI's Maschine, there's no global retro emulation mode onboard for the crunchy sounds of classic boxes like the SP-1200 and MPC-60. We also think that there's now a strong case to be made for adding plugin hosting support, although with 18 onboard modules to chose from, live performers do have plenty of choice in this respect.

Spark has been a powerful and fun percussion solution for some time now, although largely thanks to its staggeringly comprehensive collection of vintage drum machine emulations. With version 2, though, it has much, much more going for it than just that.

If you're in the market for a software groovebox with tons of tweakability and modulation, it's a competitively priced option that you definitely need to try.