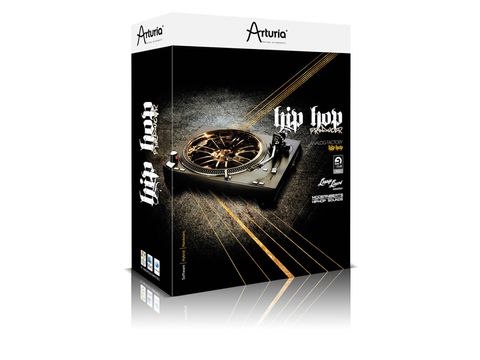 A credible all-in-one solution for hip-hop beginners with synths, samples and a sequencer covered.

Arturia's Hip Hop Producer is a bundle of software that contains a DAW, a synth specially designed for hip-hop, an electric piano and a bundle of samples too. We'll take a look at the other components of the package later, but for now let's concentrate on the centrepiece, the Analog Factory Hip Hop plug-in.

As the name suggests, this is a version of Arturia's successful Analog Factory soft synth, originally released in 2006. The Hip Hop version follows the same preset-based formula, with the options restricted to 250 patches generated using the synthesis engines behind Arturia's ARP 2600, Yamaha CS-80, Moog Modular and Minimoog clones.

Although the setup might seem slightly restrictive, Analog Factory isn't just a preset machine. Every one of the patches allows you to take control of filter cutoff and tweak the ADSR controls of the amplitude envelope.

In addition to these basic settings, each patch also assigns four more variables to the central bank of Key Parameter knobs. These knobs are patch-dependent, allowing you to take control of more advanced parameters such as filter envelopes, oscillator tuning and portamento. The results are excellent, delivering a bite-sized chunk of Arturia's analogue emulation power.

The Hip Hop bundle includes a basic DAW in the form of Ableton Live 8 Lite Arturia Edition. As you'd expect from a Lite edition, this strips away many of the features of the full version, but still includes more than enough for beginners.

For instance, you're limited to a maximum of eight audio and MIDI tracks, which might become restrictive before too long but should be enough for a beginner, and Live Lite can be upgraded to a full version once cash allows.

Once Live is installed, it's easy to get started making beats, loops and tracks with Analog Factory and the other elements of the bundle. Live's sample abilities are demonstrated by a sample pack drawn from Modern Beats' extensive product range, featuring 1,200 samples and 30 MIDI patterns for use in your own productions. The quality is excellent, and these beats and loops should have you rocking in no time.

For us, the real jewel in the crown is Lounge Lizard Session, a slightly stripped down version of Applied Acoustics' Lounge Lizard EP-3 electric piano plug-in. Although the Session version restricts you to four Rhodes and Wurlitzer presets rather than offering full control of the tone, you're still able to adjust tremolo, drive and a handful of basic effects.

This product's main selling point is that it offers a little of everything, from a DAW all the way through to samples and synths. Overall, it's a quality package which includes everything a beginner needs and would even offer good value to producers looking to add to an existing software collection.

Of course, if you don't need all the extras, you may find better options elsewhere. The full version of Analog Factory, for example, costs a little more than this bundle but offers a whopping 3,500 presets in comparison to the Hip Hop version's 250.

Even so, if you're a newcomer to hip-hop production, or are a finger-in-all-pies kind of producer, there's no doubt that the Hip Hop Producer bundle contains everything you need to get started and offers great value for money.

Listen to some of the Hip-Hop Producer sounds: