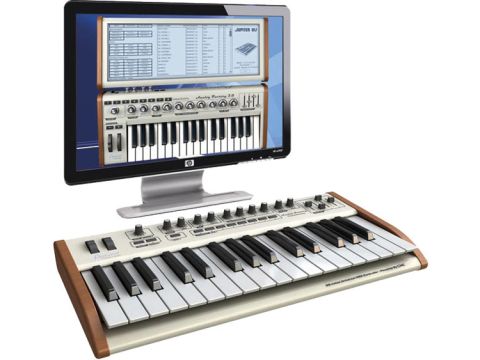 Analog Factory Experience is ideal for the synth-slut performer, and comes at a very reasonable price, too.

The Analog Factory Experience comprises a software installation CD and a universal MIDI controller. The CD contains Analog Factory 2.0, an updated version of Arturia´s vintage synth compendium, but the hardware interface is the headline-grabbing feature.

For the first time, Arturia is selling a USB keyboard front-end that enables you to not only play the soft synth, but also tweak the parameters of each preset. This goes some way towards giving the user the experience of using a real analogue keyboard, but more on this later.

The most attractive feature of the Analog Factory is the ability to use all seven of Arturia´s analogue synth emulations in one package. Analog Factory 2.0 includes models of an ARP 2600, a Yamaha CS-80, a Minimoog and Moog Modular, a Prophet 5, Prophet VS and, for the first time, the Roland Jupiter 8.

That´s an awesome collection of classic synths - the thought of having all seven original machines in one room makes us feel a little light-headed!

The only snag with the Analog Factory Experience is that you only have access to a handful of the parameters that these synths offer. You can adjust the cutoff and resonance level in every patch, plus adjust the LFO rate and amount. You can also change the envelope settings via ADSR sliders, and also tweak four other ‘key parameters´.

Clearly, this is not the same as having the original Arturia soft synths loaded in your plug-in folder, but given that you have over 3,500 presets to choose from as starting points, it´s not as much of a handicap as it might seem.

You have the facility to save tweaks to the preset sounds using the ‘user presets´ facility, while the ‘snapshot´ feature - eight buttons on the MIDI keyboard that you can use to recall your favourite sounds.

Of course, you´re only going to be interested in the Analog Factory Experience if it sounds good, and we´re pleased to report that it does. Each classic synth emulation sounds very similar to the hardware that it´s modelled on.

Our favourite is the Prophet V, which has almost all the depth of character of the original Prophet 5. The Moog emulations are great too - the Minimoog V has that low-end growl which is fundamental to the Minimoog sound, and the Modular V is fresh and full of detail. Load in almost any Modular V preset and you´re instantly transported back to the 1970s.

So, who will buy the Analog Factory Experience? The answer is simple: anyone who wants access to a vast array of analogue-like sounds at the touch of a software - and now hardware -button.

This collection should prove popular with programmers looking for a bit of analogue spice to liven up their productions; place almost any of the 3,500 presets in your track and you´ll have added the distinctive flavour of the synth that it´s drawn from instantly.

Quite simply, if the Analog Factory Experience doesn´t have the sounds that you need for your next project then you´re either impossibly hard to please or have completely misunderstood what an analogue synthesizer should sound like!

There are a few niggles, though. Although parameters such as cutoff and resonance and the ADSR envelope have dedicated knobs and sliders on the hardware, the four key parameters change functions depending on the selected patch. They´re always mapped to important, eminently tweakable things; the only problem is that it´s impossible to know what you´re changing without using a mouse.

If you move a knob using the software interface and a mouse, a small window pops up telling you which parameter you´re changing. But when you reach for the hardware controller knobs, it´s impossible to see what you´re about to adjust.

This means that to use the hardware controller effectively you have to use the mouse too, which kind of defeats the object of the controller.

The solution would be to label the knobs on the software interface - they could pop up as you selected each preset- so you could at least refer to your computer monitor before you started twiddling.

Another fundamental problem is that the universal MIDI controller can only output the 128 values that a standard MIDI controller can output; each knob outputs a MIDI control value. What this means in practice is that if you move, say, the cutoff knob on the controller, you can clearly hear the filter stepping through the values.

This is called ‘zipper noise´ and can sometimes be desirable, but here, it destroys the illusion that you´re working with an analogue filter, which gives a smooth transition between settings.

We´re hoping that both of these issues can be addressed in a software update from Arturia, and while it´s at it, maybe it could correct the spelling error on the Analog Factory 2.0´s screen - envelope is spelt with just one ‘p´.

Fortunately, these two design problems probably aren´t deal-breakers for most prospective purchasers. If you compare the Analog Factory 2.0 to any of the vast selection of sample libraries covering the same ground, it wins on almost every comparison.

And the ongoing debate about whether these soft synths really sound like the classic keyboards they´re emulating is redundant in 2008. The Analog Factory Experience is a superb synthesizer in its own right: it has almost all of the sonic character of an analogue synth, and with a price tag of £230 (software and MIDI controller), it´s a sound investment (pun intended).

For a more in-depth review of the Analog Factory Experience, check out issue 198 of Future Music.