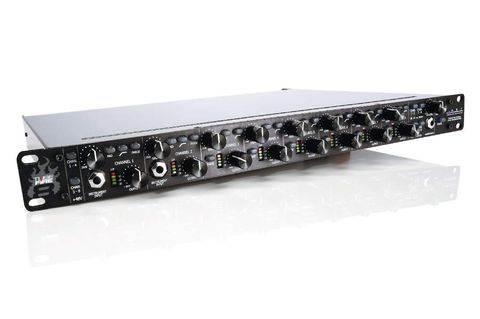 If you're after quality sound and build rather than tons of clever routing options, the TubeFire 8 is hard to beat for the price.

The world of audio interfaces is dominated at the lower end of the market by those of the 'two-in, two-out' variety, and that's all the connectivity many people need. But moving beyond this lowly spec, the options become increasingly varied. US company ART's new interface, the TubeFire 8, bundles eight Class-A tube mic preamps with a 24-bit/96kHz FireWire interface, resulting in a unit that can operate as both a standalone front end and an audio interface, with the added bonus of hardware monitoring.

Features include up to 60dB of mic pre gain, 10dB pad, low cut (100Hz, we think - the manual states 80Hz!), phase reverse, LED metering, output level trim (- to +10dB) and phantom power (in banks of four). You can run up to four TubeFire 8 interfaces in conjunction (although this is limited to two at 96kHz), and all inputs and outputs are balanced. Channels 1 and 2 have the added bonus of a front-panel instrument input jack (with high impedance), and at the right-hand end you'll see one headphone jack with level control, and switching for the hardware monitoring.

With combi XLR/jack inputs on the back, word clock in and thru, decent headroom (+24dBu using balanced connections) and hardware switching for +4/-10dB operation, the whole thing feels far more professional than its price tag would indicate. Furthermore, the preamp design is fully analogue, only hitting the A/D converter after the output trim and phase switch. It's also worth reiterating that you can run the unit completely independently - ie, without a computer - as a standalone mic pre unit.

We've long grown accustomed to interfaces - especially those ofering a fair number of channels - coming bundled with controller software. Not so the TubeFire 8. In fact, the simple applet that we installed on our test Mac only enables you to switch the clocking source from internal to external. All other settings, including sample rate, are handled by OS X's own audio/MIDI panel or your audio application itself. In Windows, the included ART Card Control Panel applet does include a few more options, such as sample rate, bufer size and so on, but neither platform ofers any complex software-controlled low-latency monitoring, and that's because the TubeFire's monitoring is all hardware-based.

So how is the TubeFire 8 in use? In a word, painless. It installs without any problems, clocks properly and sounds great to boot. The build quality is impressive - we feel it's better than much of the more expensive competition. There's no mention of either the tube types used or in what capacity, or of the type of converters inside, but the sound is clear and detailed; and with plenty of gain and headroom, it never feels compromised.

Overall, though, it feels like a mic pre with a FireWire interface bolted on (there isn't even any MIDI connectivity!). There's nothing wrong with that, and if simplicity is what you're after, you've got it, with a great sound to boot. Still, the TubeFire 8 is nowhere near as ambitious as some offerings we've seen - such as those from MOTU, RME, Presonus, et al - and for some users, it might not be quite enough.