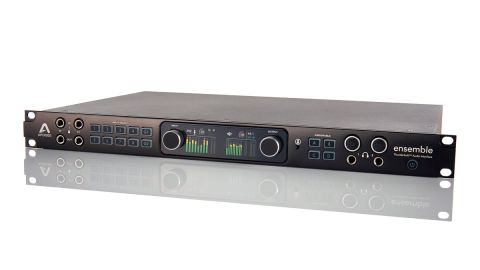 Apogee's Ensemble interface is back but we discover its update is more comprehensive than you might have imagined.

Apogee and Apple have long been joined at the hip and their symbiotic relationship has always worked well. For every development Apple's computer technology has made, Apogee's product line has expanded and adapted to fit.

As a trusted partner, Apogee has been sufficiently ahead of the curve to ensure that its updated audio interfaces, in particular, have arrived concurrently with Apple's new computers.

Apogee's revised Ensemble interface, however, has taken a little longer to follow in the wake of Apple's flagship Mac Pro and, while its new matching livery tells a 'visual restyling' story, much more compelling is the redesign to have happened inside the box.

Not just a pretty face

Ensemble is a Thunderbolt 2 audio interface offering eight rear-panel microphone preamps for which Apogee long ago developed a reputation for extremely high quality.

The eight XLR inputs double the original Ensemble's specification which is also true of the digital optical options, as a second set of inputs/outputs is provided. The front panel also provides direct inputs for two Hi-Z guitar inputs, though there's more to these than initially meets the eye.

These inputs are matched with dedicated outputs, throwing up all kinds of possibilities. For instance, you can DI a guitar signal, simultaneously feeding its dry output to an amp, ready to capture its signal at the same time.

Alternatively, you could connect the outputs to stomp boxes, giving you the feel of a full performance with the safety net of a dry signal recording captured too. Apogee, since releasing its GiO interface, has always taken guitarists seriously but it's still a welcome surprise to find this feature front and centre within Ensemble.

The rest of the front panel helps support the feeling that the revised interface is a class above its predecessor. For starters, much more is configurable from physical buttons, including the numeric Input Selectors, while Input gain and Output level knobs frame a pair of bright, attractive OLED display screens, which keep you updated with levels and settings.

There's even a built-in microphone to handle talkback requirements, while a pair of headphone ports are provided, with their own output level controls.

Round the back, an awful lot is squeezed into a relatively small frame. Inputs 1-2 and 3-4 are combi Mic/Line/ Hi-Z inputs, with inputs 1-2 even featuring their own Send and Return 1/4-inch circuits.

Inputs 5-8 feature XLR ports, while a single pair of Monitor outputs for channels 1-2 provides the only 1/4-inch output pair, with Line Outs 3-10 covered by a D-Sub connector.

Optical connectors can carry ADAT, S/PDIF or SMUX signals, with two lots of inputs/outputs here, while there are further S/PDIF connectors for Coaxial connections. A pair of Thunderbolt 2 ports and BNC Word Clock connectors complete the line-up.

Apogee's preamp reputation is second to none; this interface sounds sumptuous and there's no doubt that it will turn the heads of guitar-led producers as much as those requiring more 'regular' microphone and line inputs via its neat and well thought- through re-amping capabilities.

Last month we reviewed Universal Audio's new Apollo interface too, showing just how fierce the price war at this end of the market is becoming. The closest Apollo match to Ensemble, in terms of I/O, is the 8p model which costs £330 more. But for that, you also receive a bundle of UAD plug-ins to enable Unison preamp enhancements and further effects processing at the tracking and mixing stages.

On the flipside, while both interfaces feature front-panel Hi-Z inputs, Ensemble's guitar re-amping capabilities outstrip those of Apollo somewhat.

Clearly, it's a buyer's market and you should choose between all options carefully, but what's pleasing here is that Apogee has taken time out to seriously consider Ensemble and has launched a more inclusive and ergonomic interface than it had before. And it sounds flawless.