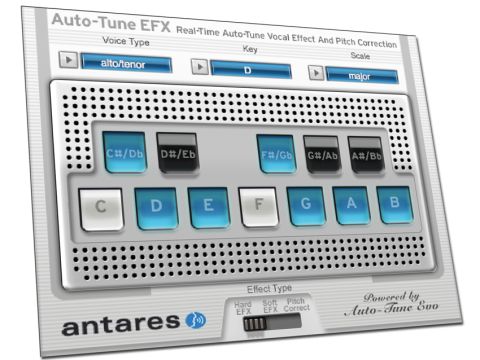 The easiest, cheapest way to get Antares' legendary pitch-correction technology into your mix.

Tuning correction has been both a blessing and a curse in music production.

On the upside, the opportunity to 'quantise pitch' has allowed vocalists to perform freely, concerning themselves with perfection of tone and style ﬁrst and foremost, safe in the knowledge that that slight tuning errors can be eradicated.

On the downside, too many producers seem to have developed a pathological hatred of notes with even slightly 'coloured' tuning, leaving listeners with a choice of bland performances from which to choose.

The plug-in which made both sides of this possible was Antares' Auto-Tune, originally released in 1997, which cemented its place in recording history by providing 'the Cher effect', courtesy of the monster smash hit Believe.

Various guises of Auto-Tune have been and gone through the years; the current 'full version' is Auto-Tune Evo, which has been positively received. However, Antares has worked out that there are tons of producers who don't need graphical editing, don't want Evo's extensive 'humanising' features and simply want hassle-free real-time tuning, with the option to adapt the 'amount' of tuning from the musically sublime to the effected ridiculous.

Enter Autotune EFX, the cheapest and simplest Auto-Tune ever released, allowing you to get a slice of Antares' famous effect for £100.

The interface reflects the plug-in's simplicity. The central section is dominated by an octave of a 'piano', with note names clearly labelled. This is where you can switch 'in' or 'out' the notes you want your sung performance to snap to, so switching in just the white notes will mean that each sung note will conform to the C major scale.

Above this, it's possible to choose the actual scale you want and to select major or minor modes. Four tuning algorithms are provided, with Soprano, Alto/Tenor and Baritone/Bass voices accompanied by a dedicated Instrument option.

At the bottom of the interface, a virtual rocker switch enables you to choose the way in which Auto-Tune EFX will work. The three options are Pitch Correct, Soft EFX and Hard EFX.

Pitch Correction speaks for itself and its job is to tune your vocal performance as naturally as possible. Both the Soft and Hard options draw on the popular 'extreme' tuning settings heard all over Kanye West's new album and, usefully, this switch movement can be automated. So if you want to change from natural tuning to EFX tuning for a particular moment in your track, it's not a problem.

Automation can also be applied to the notes themselves, so you can extend or reduce the pitch targets through sections of problem audio.

If you've long hankered after a completely hassle-free real-time pitch corrector and you fancy yourself as a T-Pain soundalike, you'd be foolish not to check out Auto-Tune EFX.

That being said, this pared-down version brings the whole concept much closer to the possibilities provided by other options - even native pitch correctors, such as the one bundled with Logic Studio, or PitchCraft, which is part of Bias Peak's plug-in suite.

Antares did this concept ﬁrst and its pitch correction algorithm is second to none but, in these cash-strapped times, we'd recommend checking your plug-in folder for suitable pitch correctors that you might already have before rushing out to make a hasty purchase.

However, if this is one sonic weapon you're missing, and if the Kanye-vocal is your goal, Auto-Tune EFX is a sound solution.

Listen to what Auto-Tune EFX can do:

Female vocal phrase: this already tuned vocal gets messed up further with the Hard EFX setting

Fixed note: Here's how AT performs when it has to bend a couple of notes to a single pitch, using the normal Pitch Correction option