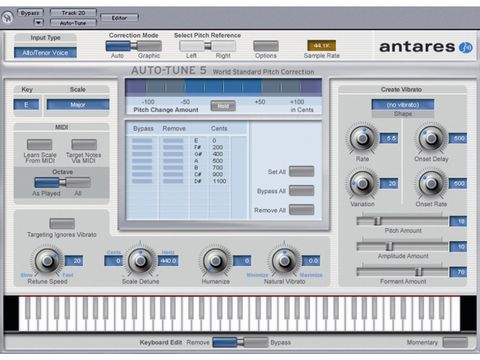 It´s hard to say whether this update will attract any new users to Auto-Tune, but it´s certainly one that will please the faithful. Future success seems assured.

Over the past ten years, there´s been no escaping Antares Auto-Tune, the fifth version of which was recently released. One of the best selling and best known plug-ins ever created, it´s truly become a legend in its own lifetime.

All of this being the case, Auto-Tune probably doesn´t need much of an introduction. However, for the benefit of anyone who´s been deaf for the last decade, we should say that it´s designed to analyse pitch and correct tuning to a specified scale. It runs in both Automatic mode - where it corrects pitch in real-time - or in Graphical Mode, where you can be more specific about the notes you want to adjust.

The first thing to say about the new version is that it looks completely different. Cynics might suggest that Antares´ motivation for overhauling the interface was to make Auto-Tune 5 seem more revolutionary than it actually is, but in many cases the changes are very much for the better.

The Automatic mode window, for example, is much clearer than before, with cleaner and more modernist controls. Gone are the round lines and bulbous shading - the graphics are now slicker and more ‘professional´.

Happily, the size of the Pitch Edit display has finally been increased to something approaching useable. In previous versions, you were forever scrolling back and forth, but thanks to an increase in horizontal size of about 50%, it now carries a lot more information (the vertical scale has changed very little).

Sadly, you can´t use the zoom and scroll commands on your mouse and keyboard, but the Pitch Edit display is certainly easier to use than before.

Antares claim that Auto-Tune 5 features an improved pitch detection algorithm that delivers better results on poor quality signals - ie, noisy or badly isolated ones. It´s hard to measure this claim scientifically so we´ll have to take their word for it.

What we can say is that Auto-Tune still has problems discerning the pitch of breathy vocals it´s often a case of trying the different input type settings and varying the pitch tracking setting until you find a combination that works. The latter has been consolidated into a single control that works in both Graphical and Automatic modes, and has been put into an options menu.

The single most important enhancement to Auto-Tune 5 has to be the way it can now clock to the host software when in Graphical mode. This has far-reaching implications: you no longer have to start your audio from the same point each time, and the plug-in can continue to work when its window is closed.

So, you can now analyse the pitch of a complete vocal track and zoom in to adjust the bits you want to alter as you did before, but you never have to record it to another track.

This is manna from heaven for everybody - particularly Logic users, who still can´t route and record signals internally. Before, you had to do a bounce of your pitch-corrected vocal, import it and then line it up by sight. However, you can now have it running in real time and continually refine it as the mix develops (this extends to multiple instances of the plug-in). If you´re using a host that doesn´t use any form of clock, you can still set it to clock internally, as with Auto-Tune 4.

With the clocking development comes real-time pitch tracking - you can see the pitch waveform appear as it passes. This makes life so much easier; you now hear a bit of problem tuning, open the plug-in window, hit the Track Pitch button and make your adjustments.

You can even make tweaks while the sequencer is running - and yes, this means you can make refinements while you´re cycling a section. In a perfect world, you´d be able to stop, start and ‘locate´ the sequencer from the Pitch window too, but what we´ve got will do fine for now.

Predictably, there are also one or two less noteworthy enhancements: a dedicated Snap To Note button when you´re using the Line tool (this saves you having to hold down Shift as in Auto-Tune 4) and a Clear All button for deleting correction lines. There are also several obscure new scales available.

Finally, in Automatic mode you can now add a variable ‘Humanize´ factor. This introduces a fast retune speed for short, staccato notes, while still allowing held notes to naturally waver.

Don´t make the mistake of thinking Auto-Tune simply looks better than its predecessor - it works better too. The fact that it clocks to the host program and can run in real-time (with no need to record the results as you go) means it´s much more straightforward to use.

Its name may have become a byword for inauthenticity, but Antares´ plug-in is still very much the real deal.