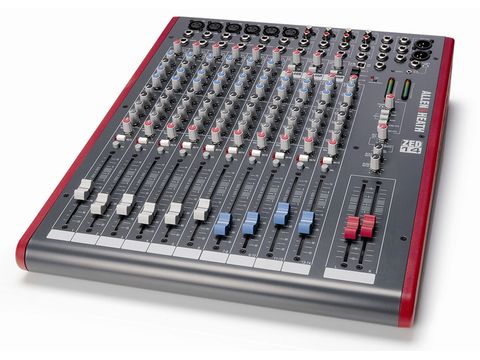 The ZED 14 is a success on all fronts - the sound quality is good; it's easy to use and its facilities lend themselves to a variety of both live sound and recording tasks. Considering it's bundled with Sonar LE, it offers good value for money.

While sound quality is obviously an important issue, it's more than likely that it's a particular mix of facilities that draws us to one mixer rather than another. Versatility is the name of the game in choosing a mixer that you can use for both live sound and recording tasks.

Allen & Heath's compact ZED 14 would be equally at home in both stage and studio environments but aims to take that versatility just a little bit further by having a USB stereo connection for transferring audio to and from a computer.

First impressions of the ZED 14 are that it has been constructed to a high standard with sturdily fixed sockets, and has knobs that show no sign of wobbling. It sports 100mm long throw faders rather than the shorter variety. There are six main mono channels with both mic and line inputs plus a further four stereo channels with line inputs. Add to that two basic stereo returns and the stereo return via USB and you have 13 sources to the mix.

Each of the six main mic channels is fitted with the DuoPre preamps, which use a two stage design with carefully controlled amounts of gain in each stage for optimum results whether a line source or a mic is plugged in. This obviously works well, as the sound through these is clean and very clear.

EQ is taken care of by high- and low-frequency shelving filters, and a swept midrange offering 15dB of cut or boost over a frequency range from 120Hz to 4kHz. This means there's plenty of flexible control over the critical areas. Each channel also has four AUX sends, two being pre-fade for use as monitor or cue sends, while the other two are post-fade for accessing any external effects.

Monitoring is available via headphones with both a standard quarter-inch stereo socket and a mini jack socket, and there is a separate 'ALT' output that can be used for connecting speakers.

The computer connection is USB1.1 rather than the more powerful USB2, so it just supports transfer of two channels (stereo) from the main mix buss. This is completely viable for recording one instrument at a time or a balanced mix of several channels. However, anyone with a separate multi-channel audio interface would still be able to record several channels, (perhaps the output of each mic on a multi-mic'd drum kit), on to separate recording tracks by taking advantage of the AUX sends or direct feeds from the insert points of the relevant channels.

There are actually three options for routing audio via USB from the ZED 14. Besides the main mix you can send from either of the two sets of AUX sends, which, with the pre-fade sends, could allow recording of a different mix to a computer than you're hearing from the main faders. An example of that might be in recording a live gig where a different balance is needed for the recording than the main output feed to a PA, which will more than likely be vocal-heavy. The post-fade AUX sends to USB connection also opens up the intriguing possibility of accessing computer-based effects plug-ins during a live gig and bringing their output back into the desk.