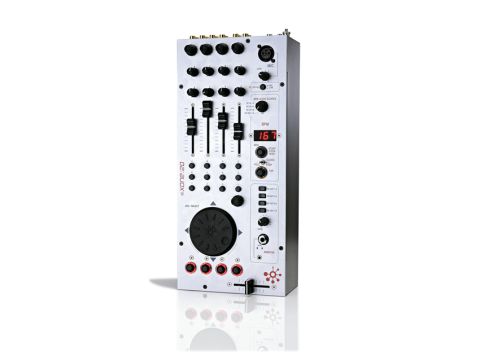 A lot of control, a lot of integration, but it's a lot of money for what ultimately will only be a part of the solution.

DJs have never had it so good As technology improves, more intuitive software puts the emphasis on results rather than methods, expanding creative horizons.

Allen & Heath's prestigious Xone range has been incorporated by some of the biggest clubs and biggest artists in the world, and for good reason.

The Xone:2D is the an upgrade hybrid mixing console, superseding its predecessor the Xone:1D.

A major upgrade from the Xone:1D is the integrated, multi I/O soundcard. There's a whole lot more than your usual phono outs and a headphone socket though; the 2D is built for much greater things.

The bpm-to-MIDI convertor and pull/push lever (a nice touch) confirm this suspicion.

These all feel nicely rugged and turn and slide sympathetically. And that's not forgetting the crossfader and four-button-clickable jog wheel.

So, with all this functionality and all this integration, you'd think the Xone:2D would sit perfectly in the chain between 'real world' audio and digital DJing. And you'd be sort of right.

While the 2D is definitely packed with features, some unique, most generic, once again, it's the usability that lets it down. Its layout is hardly ideal to use without any other controllers.

Whil the Xone was designed to be used in conjunction with other sources and units, surely the cost of the controller should also provide you with a highly usable standalone unit as well as an integrated one.

It seems A&H's attempt to cram so much onto one controller, while applauded, has really just made things confusing.

The 12-button grid is ideal for Ableton Live but for Traktor control, they're much too anonymous to take into account what each does on the fly, although you can print off PDF overlays for each program.

Speaking of Traktor, the TKS available from the A&H website just adds to the confusion, it's better to make your own from scratch - an unwelcome chore after forking out so much cash.

The bpm counter works as expected and converts to MIDI sync really well. We had an external source synced with Traktor within five minutes of switching it on.

Pushing and pulling of the sync via the lever works perfectly and feels natural.

There's a lot to be said for the 2D. On one hand you've got a hell of a lot of control, great integration, some unique features and a very well-built unit.

On the other, it's a little crowded, doesn't feel intuitive to use and the layout will definitely take some time to get used to.

We get the feeling this will be either a love it or hate it unit, but either way, you can only applaud A&H integrating so much.

It could have been laid out better, but it's still a step in the right direction.