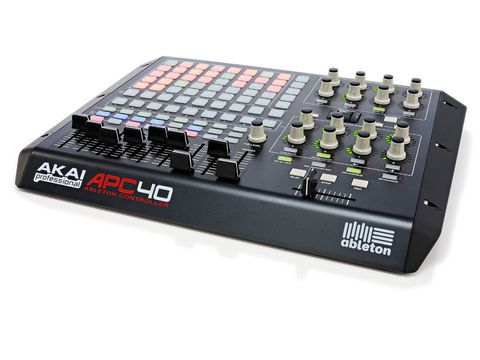 The Live controller everybody now has to beat - a great balancing act between price and function.

Can one hardware controller satisfy every type of Live user? Possibly not, but Akai's APC40 is here to give it a good go.

The black/grey APC feels solid and certainly won't dismantle itself mid-set. The size, meanwhile, is 'interesting' for something targeting performance use - it's a little big to be comfortably backpacked, and we've done a lot of gigs in bars and booths where this wouldn't fit.

The size makes sense in other ways, though - the controls are clearly laid out, and there's enough room between them for the chubbier-fingered artist.

But where should you put the APC? If it's beside your computer, it might get in the way of your USB, FireWire, or power cables. If it's in front then your screen and keyboard are going to disappear into the distance.

Fact is it's always hard to get a line of sight where you can see what's happening on the APC and what's going on on your screen at the same time.

The left-hand side of the APC's surface holds the clip launch buttons, and below that is the mixer section, including a cue level knob and short faders. The knob-rich right-hand side deals with effect sends, navigation, macro controls, transport and finishes off with a replaceable DJ-style crossfader - DJs will also dig the dedicated nudge and tap tempo buttons.

Round the back there's a USB connection, mains power in, on/off switch, and two footswitch inputs.

Plug the APC into the mains - you can't power that many lights over USB - and connect it to your computer. Launch Live 8 (or the feature-limited version of Live that comes in the box to get you started), open Preferences, and select the APC as a control surface in the MIDI/Sync tab. Load some clips into the Session View and the clip buttons light immediately to show their status. It's simple.

There are four colour states: Off = no clip; amber = clip loaded; green = clip playing; and red = recording. The APC can't differentiate deactivated clips, though, and we'd prefer it if they disappeared from the grid, but tap a launch button (they're not velocity sensitive, by the way), and it'll ﬂash according to global quantisation before the clip launches, just like on screen.

A red rectangle appears in the Session View, enclosing the first eight tracks horizontally, and the first five scenes vertically (that's right - 8 x 5 = 40). The clips in this area are the ones in focus on the APC clip launcher grid, and you can use the bank select buttons to move this rectangle up/down and left/right in steps of one scene or one track.

Alternatively, press the shift button at the same time to move in steps of five instead. Press the shift button on its own, and the grid 'zooms out' so that each lit button represents an 8 x 5 grid from your Session View, then tap any one of these to jump straight to that grid.

Below the clip grid you've got nine clip stop buttons, and below those, nine track select buttons. At the right are five scene launch buttons. All perfectly sensible.

Things come up for debate when you get to the top right however. There are eight knobs for pans and sends. Press the pan button to make them pans, press the send A button to control the send A level for each track, likewise with sends B and C.

It feels intuitively like these knobs should reﬂect the currently selected track, so you'd see all sends for a specific track - eight sends - but what you get instead is all of the send As or Bs or Cs for your grid. Which is odd.

Meanwhile, the lower eight knobs instantly map to the first eight macros or device parameters in your chosen track, but use shift and the four buttons below them to switch between four banks - so you can step to the next eight controls in whatever device you have loaded.

The rest of the time, those four buttons are for viewing, activating, and navigating effects in the highlighted track. Below them are buttons for record quantisation, MIDI overdub and metronome, which is easy to trigger accidentally during a set, and is out of place on a performance tool like this. We'd give anything to trade it for a dedicated BPM knob, but it's important to remember that these ready-made MIDI mappings can be overridden by going into MIDI Map Mode as usual.

We enjoyed our first jams with the APC, and the clip launch grid is fun, but it doesn't give enough visual feedback that you can work without looking at the computer. And we still couldn't figure out where to put it. Over time, though, we started to get somewhere - we decided to overhaul our Live set, optimising the Session View clip layout and the arrangement of the on-screen windows, so the computer showed what the APC couldn't.

We updated the layout of our clips so that each track contained mainly one type of sound - making it easier to remember what's in each clip slot. We also deconstructed the way the clips are laid out across scenes; we're not using scenes so much to work through songs - there's more triggering of individual clips.

We used Live 8's Zoom Display feature to zoom up to 185%, hid our return tracks, closed the browser, opened our sends, and expanded the Session mixer upwards so that only five scenes were visible. We also dragged our tracks wider to fill the entire width of the screen.

Then we put the APC on top of our 15-inch MacBook Pro's keyboard - the APC's feet sit on the MacBook's speakers, and there's just enough height to clear the keyboard.

After these changes, it started to feel more like a hardware experience - like having an APC with a massive screen hanging off the back. It doesn't take long to get used to the rectangle-based navigation either, and the overview feature is a smart idea for managing more than eight tracks.

So, can it live up to the anticipation? Yes - a lot of thought has gone into this, and it's paid off. Will it satisfy ever type of user? No - but let's break them down.

Producers might be better off with something like a Mackie MCU, unless they're the type who enjoys composing with jams in Session View. DJs will get more out of it, though a mouse is still needed to drop songs in from the Browser, and MIDI mapping will be necessary to control loop parameters.

The APC's a Session View machine that's going to work best for performers - that's why there's a P in the name, after all, and you'll see a lot of these at gigs this year. Those who use it might want to add a more interactive gesture-type controller, though, for Ableton's standard XY-style effects parameter control.

There's another important type of user, though - the new user. If we were coming to Live from scratch, this would definitely be on our list, especially at this price.

In short, you'll get the most out of the APC by meeting it in the middle: change your working methods, or as a new user, don't resist building your Live set around its layout and you'll soon get the best from it.

As a piece of hardware, it's not revolutionary by any means, but the APC40 and Live do work great together. The value of having Live's Session View replicated in hardware can't be underestimated and remains a feature that - right now - no other controller attempts or pulls off so ably.