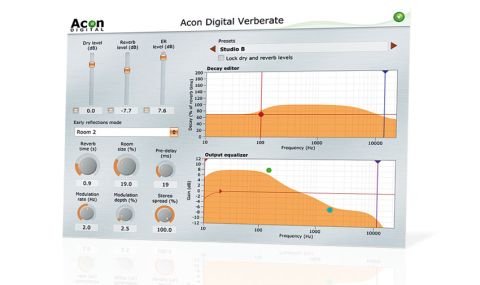 An algorithmic reverb that really does sound as realistic as a convolution reverb! Could this be the start of a revolution?

Most reverb plugins today fall into one of two categories: convolution reverbs using impulse response samples to reproduce models of the real-world spaces in which they were recorded; and algorithmic reverbs, which emulate spatial environments by conjuring them out of thin air using nothing but code.

In general, convolution reverbs are the more realistic of the two, but algorithmic reverbs are often preferred for their larger-than-life sounds and focus on sonic quality rather than realism.

Separating itself from the crowd, Acon Digital has built its new plugin, Verberate (VST/AU/AAX), to straddle this divide, basing it on algorithms designed to produce realistic reverb tails and thus making it sound more like a convolution reverb than an algorithmic one.

Straight away, it's apparent that Verberate sounds different to any other algorithmic reverb on the market. It has a dense, lifelike character to it - much as Acon Digital claim - and the detail in the tail could indeed lead anyone to mistake it for a convolution effect.

The significance of this will immediately hit home for anyone who's ever trawled through a library of impulse responses - which typically don't load anywhere near as fast as algorithmic reverb presets do - or attempted to use an algorithmic reverb to produce the sound of a real acoustic space, warts and all.

Making our way through the presets, we found some superb ready-to-go effects for a range of instruments both acoustic and synthesised. In our tests, Verberate shone brightest on short to medium length tails, and we'd still probably turn to a more typical algorithmic reverb for super-long "fantasy" tails. One of Verberate's greatest strengths, without doubt, is the way it adds a sense of vividness to sampled drums and percussion that "just works".

Unlike most genuine convolution reverbs, Verberate is easy on the host computer's resources (even at sample rates up to 96kHz), and extremely flexible to set up and tweak once you've got your head around the interface.

Most of the basic work can be done with the Reverb Time and Room Size controls, in conjunction with the Pre-Delay time. Modulation can be applied to the tail using the Rate and Depth knobs, and you can specify the tail's frequency response over time using the Decay editor (making the high frequencies die off quicker than the low ones, for example).

There's also a Stereo Spread knob for pushing the signal (including early reflections) progressively further out into the stereo field; and a useful Output Equalizer offers a degree of frequency shaping, although it's a bit fiddly to negotiate.

Verberate is a brilliant, novel and genuinely unique offering from the increasingly impressive Acon Digital - although certainly not a reverb for all occasions. It's delivered in a minimum-fuss interface, and it sounds as convincingly spacious as any other digital reverb we've heard.

Perhaps its only real flaws are side effects of its realism (ie, it's not so great at "unreal" effects), but we don't think we're exaggerating when we suggest that Verberate really could obviate the need to keep a convolution reverb in your plugins folder at all.