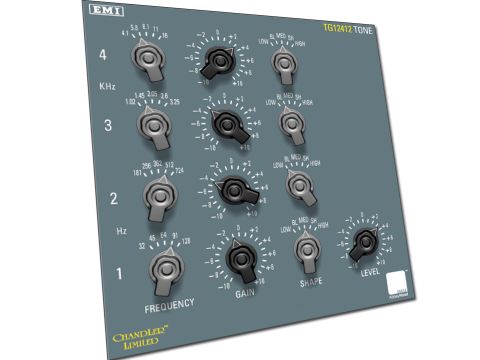 Both for in-channel use and over your master output mix, the TG Mastering Pack is thoroughly recommended.

The TG12412 is effectively a four-band parametric EQ, with each band providing access to one of five notched frequencies for bass, low-mid, upper-mid and treble. Up to 10dB of gain can be added or cut from the frequency of your choice, and a final Shape dial for each band offers low- and high-shelving, alongside 'blunt', 'medium' and 'sharp' options.

In this way, you can choose the bandwidth for the EQ treatments you fancy which, as you might expect, can cover anything from soft and comforting to pleasingly raspy.

As a mastering EQ, the 12412 is wonderful. It can add shimmer and sheen to a mix without excessive colouration and its effect never becomes unnatural, even at more extreme settings.

The name might be only subtly different, but the TG12414 is a world apart from its brother. Stepped low- and high-pass filter dials enable you to roll bass and/or treble out of your mix at musically sensible intervals, and while the dials don't have an 'off' position, they can be moved to 'high' and 'low' respectively which shifts their effect beyond the audible extremes of the frequency spectrum.

Additionally, and extremely usefully, a central Presence EQ dial enables +/- 10dB of gain to be applied to one of eight stepped frequencies spanning from 500Hz to 10kHz, so here's a chance to add some extra warmth or track down and remove a problem frequency.

Both plug-ins feature an output gain dial to let you compensate for the dynamic changes you've made.

The Mastering Pack might only contain two plug-ins, but its applications are limitless. Which of these will prove most handy will depend hugely on the type of music you're looking to make, but certainly, used as a mastering tool, the TG12412 is a glorious EQ.

The TG12414 is a more esoteric plug-in but one capable of some great results too.

Without question, this bundle is another Abbey Road hit.

Listen to the Mastering Pack in action:

Beat Loop: using the TG12414 filter to tighten bass and remove crunch from the mid-range

Rhodes Warmth: using the TG12414 to add extra drive at 2.8kHz and a little scooping below 80Hz

Electronica track: before and after mastering example. In the second clip, the TG12412 adds spit and polish and the TG12414 removes a problem mid-range frequency and scoops out some bass