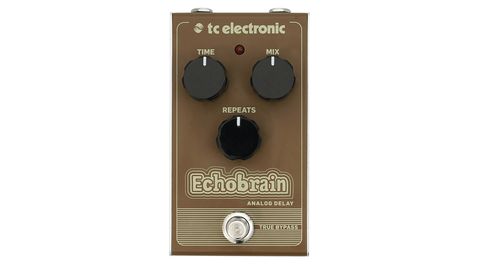 An excellent pedal that comes without a heavy-duty price tag.

If your budget doesn’t stretch to the Boss DM-2, but you want a no-frills alternative for some BBD thrills, then the Echobrain is the pedal for you.

It’s built like a tank with oversized knobs, but don’t let its 1970s radio look fool you: this is no retro toy. While the repeats are generally less gritty than the DM2, there’s still the analogue warmth you’d expect from the bucket-brigade chip, as well as a decent maximum delay time of 300ms.

The auto-oscillation is musical and tameable, and there’s a wide threshold where the pedal will make repeats swell up, only to back off before they tip into runaway feedback.