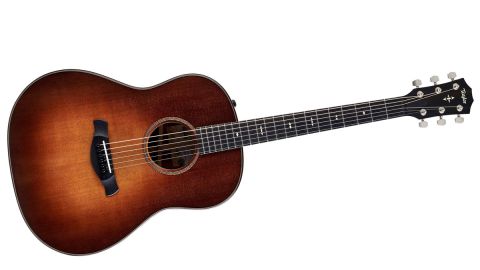 A stage-ready, tonally adept instrument that will provide the goods reliably for years.

As far as Taylor’s V-Class bracing is concerned, the jury has given its verdict and found it to be a decisive step forward for the acoustic manufacturer, adding subtle nuancing to the models that have presented themselves to these ears so far, at least.

Far from being an evolutionary leap from the more established X-bracing developed by Martin, V-Class seems to be taking its place alongside its forebears on equal terms and thriving accordingly. Prejudicial ears will always favour the familiar, of course, but open-mindedness is often rewarded.

Having started as a tentative experiment in Taylor’s high-end range of instruments, V-Class bracing is now starting to filter throughout the catalogue and, judging from what we have before us today, inspiring new models in the line. Dreadnoughts without X-bracing? Well, why not? But enough about what lurks under the bonnet of this russet-hued model, let’s see how it sings.

Our guitar features a deep-brown Wild Honey Burst finish (Natural is optional) over the torrefied spruce top  If the rounded-shoulder design harks back to a more vintage-y aesthetic, then so does the finish using Taylor’s ‘silent’ satin on the body (again, introduced last year) to prevent the ‘squeak’ you often get from a high gloss. The whole package seems to dig back into a bygone era - at least for the hugely contemporary Taylor.

The 517 features mahogany back and sides along with a mahogany neck, all of which is toned in to match the deep brown of the top. As ever, the fingerboard and bridge is a deep dark ebony but the inlay is minimal; binding is of the same colour with subtle purfling and minimal soundhole decoration. It appears the intention is not to offer a cutaway, either.

As with any of the new V-Class models, you’ll see a new Taylor label along with a black graphite loaded nut. Peer through the soundhole and you’ll also see the angled back brace and, as ever, Taylor’s exemplary craft is hard to fault, but there are numerous changes to the recipe beyond its internal voicing. Its neck shape, for example, is classed as having a “compound carve neck profile, which subtly transitions from a slight V at the nut to a rounded C, and features a rounded ridge-less heel”.

There appears to be a little more heft to the neck with a front-to-back width of approximately 22mm at the 1st fret and 24.3mm by the 10th. The fingerboard edges are lightly rounded, too, which gives the neck a less pristine feel, while fretting from Taylor’s standard medium/small gauge and the new ‘arrowheads’ inlays are typically sharply done.

There’s a new ‘curve wing’ bridge design that rounds the sharp points of the bridge endpoints giving a little more comfort, like the noticeably chamfered edge of the binding along with a more rounded nose to the heel (which, incidentally, has no strap button). Subtle, yes, but both help with making the design feel more comfortable and more hand-tooled.

While pure acoustic models are offered, our electro versions feature the Taylor ES-2 with its trio of discrete controls - volume, bass and treble - on the upper shoulder. The output doubles as the only strap button on the base of the guitar where you also change the battery to power the preamp.

Picking up the 517e, the first thing you notice is the satin finish, which feels smooth and has a very old-world quality to it. We put the ‘silent satin’ through its paces and, sure enough, it didn’t squeak once! The neck feels comfortable, the advances here - the transition from V to C - are subtle and certainly don’t throw anything unexpected under the wheels of your playing style. Just like most compound radius fingerboards we’ve tried in the past, if you didn’t actually know they were there, you wouldn’t immediately detect any change of feel while casually polishing up your ditty repertoire. Once informed, you might conclude that Taylor’s Compound Carve is aiding your transit from low positions to high, but many, we suspect, will be content to remain in blissful ignorance, so subtle is its effect.

The 517e is well balanced on the lap when playing in a sitting position. The lack of a second heel-mounted strap peg prevents us from commenting on how the guitar would fare when standing, but there’s nothing here that would lead us to suspect you’d experience anything untoward.

As to its voice, maybe it’s that change of bracing, but that ripe ol’ dreadnought thickness in the midrange has all but disappeared. Let’s not forget, though, that this is a modern dread, with a contemporary pickup system and not something that relies on an enhanced lower middle response to be heard via a microphone in live performance, as was once the case. Then it was down to the more boom the better, but today we live in a more technologically enlightened world. Instead, here we are treated to a smooth equality across the frequency range, and while it might not be the loudest dread we’ve encountered, it certainly has charm.

It would be tempting to judge this Grand Pacific model on the difference that V-Class bracing has brought to the party, but it would be wrong to do so. We’ve already seen how the new system has proved itself, so the real question is ‘does it satisfy as a vintage-informed dreadnought?’ And we’re happy to say that it does.

The slightly cleaner and less muddy lower midrange means they don’t quite fit the established thumbprint, but is that really such a bad thing? We don’t think so. The point should be that Taylor has succeeded once again in building a stage-ready, tonally adept instrument that will provide the goods reliably for years into the future. And when you think about it, you can’t really ask for more.