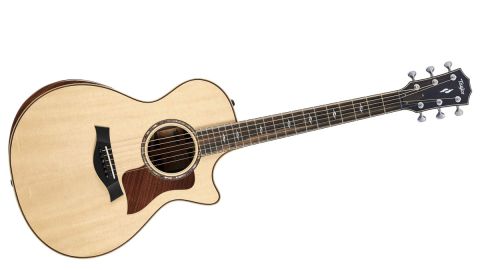 V-Class replaces the more established X-bracing pattern that has been standard for generations and is said to increase sustain and improve intonation. We’ve looked at a few V-Class Taylors in the past and found them to be sweetly voiced and characterful, and so expectations are high for the model in front of us here.

The Grand Concert body shape is smaller; Taylor comments that it represents the perfect dimensions for “players of smaller stature as well as those who simply prefer an intimate guitar-playing experience”, and that the addition of the V-Class bracing makes for “a fuller, more robust sound from a compact frame, one that at once makes these guitars more versatile while enhancing the core tonal benefits of the Grand Concert shape”.

The 812ce, has a spruce top and14 frets to the body. It’s always difficult for we scribes to transmit dimensions in these reviews; in many ways, numbers mean very little. We could say, for instance, that the body of both these Grand Concerts checks in at 381mm (15 inches) max width and that they stand a mere 1,041mm (41 inches) tall in the case of the 812ce and 984mm (38.75 inches), but that doesn’t convey much unless you happen to have a tape measure to hand. Suffice to say that we think this body size is supremely manageable and pegs in some halfway between a parlour and a jumbo. Small but perfectly formed, in other words. Glad we sorted that one out.

The first thing that strikes us is that the 812 looks wider than the recently reviewed 512, but it isn’t. We’ve measured, trust us. It must be that the slightly longer overall length and the whiteness of the spruce top gives us this illusion. In any case, this time the body is fuelled by the combination of spruce and rosewood - and when we said that the 512’s mahogany was a member of tonewood royalty, then we’d stick our necks out and say that rosewood is its undisputed king. Spruce has a reputation for weathering and opening up over the years, whereas cedar tends to give off its best from the word go. Rosewood offers depth and complex overtones, the very finest (Brazilian rosewood, for example) having an ethereal resonance that some have compared to cathedral-in-a-box style reverb. At any rate, this marriage might just be made in heaven. Let’s not forget the rosewood insert that forms the armrest on the bass side lower bout, another touch of luxury from this 800 Series instrument.

As with its little brother, the neck and fingerboard are mahogany and ebony respectively, with 20 frets and the slightly jazzier Element inlays. There’s a little flare of lighter wood amid the dark ebony on this fretboard that represents another arty flourish separating the two models. The headstock - a slightly more elongated affair than on the 512 - boasts antique chrome Gotoh tuners, as opposed to the three-a- side homegrown tuners on its sibling. There are more ornate touches with an abalone rosette and ebony binding to the body, setting these two apart in terms of livery, but what have they got to offer when we pluck our first few notes?

The spruce and rosewood conspires to give the guitar a bright overall timbre and perhaps a livelier, more instant response to the touch than the aforementioned 512. It might be a smidge louder, too. There’s a bit more drive in the basses, but our ears would judge that the trebles on the 512 are just touch sweeter. It’s likely that the 812’s spruce will open up a bit further down the road and square up or even overtake its sibling in this respect. Time will tell.

This guitar is imminently playable, the satin feel on the neck helping the hand settle in immediately, and the setup (it has a low-to-medium action) doesn’t place any obstacles in the way of the fingers partying till they drop.

Plugged in, Taylor’s Expression System 2 pickup and preamp combo steps up to the mark in providing a sensible amount of control over the sound via the three rotaries squirrelled away on the upper bouts. We found we could leave the treble and bass controls flat. Would we opt for the 812 ahead of the 512? Well, there’s just something about those spruce tops.