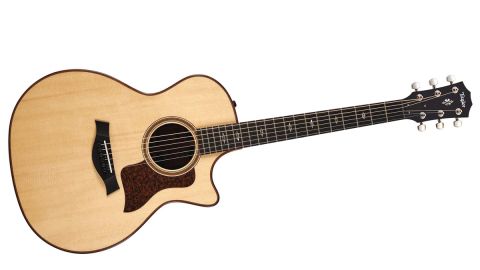 We’ve consistently failed to find a hair out of place with a Taylor...

Taylor launched its V-Class bracing in a typically well-managed media campaign to coincide with NAMM 2018 back in January - fitting for one of the biggest stories in the acoustic guitar world for quite some time.

Ever the innovator, Taylor simply refuses to look backwards to move forwards. To recap, V-Class bracing is a replacement for the time-honoured X-brace. Two main braces, laid out in a V shape, start either side of the soundhole and run down to the end block. A main cross brace sits below the soundhole - easily visible through the soundhole - while four additional braces fan out either side of those main V’d braces, below the bridge. That’s it. Aside from checking the soundhole, the main identifier for V-Class is simply the black graphite nut, visibly angled back braces and here - compared to our standard-braced 714ce - an additional ‘Reflections’ headstock inlay. There is also a new inner label, which for the first time, features the signature of Andy Powers, Taylor’s Master Luthier and the creator of V-Class.

The spruce/rosewood 700 Series, like the majority of Taylor’s guitars, already received an Andy Powers makeover back in 2016. It introduced an optional Western Sunburst top, a ‘weathered brown’ pickguard, multi-ring rosette (featuring Douglas fir, like a ‘natural half- herringbone’), which is echoed as purfling inside the Hawaii koa binding.

A new feature that was introduced then (and remains here) is the Lutz spruce top, which according to Taylor has a “naturally occurring hybrid of Sitka and White spruce, which blends the positive characteristics of these woods (and its close cousin, Engelmann spruce) with the robust tonal output of Adirondack spruce. It will respond well to a strong attack.”

“In many respects, it’s become my favourite spruce,” says Andy Powers. “It has power and headroom, but without sounding brash. It’s doesn’t sound brittle and it’s not too aggressive. It has a ton of warmth.”

He continues: “A lot of times Sitka will sound like a [Fender] Twin Reverb - a superb high-wattage amp, with super-clear headroom, and very powerful, but it can be a little stark. The Lutz spruce has headroom and that power, but the whole sound is broad and warm. It sounds more like a [Fender] Vibroverb or something, where there’s plenty of horsepower, with a rich flavour. It tends to give you a little more colour, which I like for the 700 Series because it fits the guitar’s identity. It fits the strummer a little better in many cases.”

We could waste words here on the build details but we’ve consistently failed to find a hair out of place with a Taylor, not least at this price level. This V-Class 714ce, and its standard-braced sibling we had for comparison, are both beautifully faultless.

The 714ce is the epitome of Taylor and is known for its clear, articulate voice with generous but rarely boomy lows, crisp contemporary highs and a slightly relaxed midrange. Bundle in the virtual electric-like playability (string gauge aside, of course) and huge consistency and here’s one guitar that you can buy with a click of mouse.

Listening first to the standard-braced 714ce, balance is everything and the previous upgrade definitely added a little more oomph in terms of dynamic range and response, which creates a guitar that belts it out when strummed hard, but doesn’t lose its life when fingerpicked. But we know that already, right? What does V-Class bring?

Well, if we were A/B’ing this pair in a store, we’d walk out with the V-Class model even if we had no idea of the constructional differences. Why? As good as the standard model is, the V-Class version seems louder with a wider dynamic range. You really can hit this hard and get a result - the standard version didn’t seem lacking until we played the V-Class. More generally there appears to be more clarity and depth compared to the standard braced model.

Swapping between the two, the V-Class simply sounds cleaner in the lower mids (but not deficient), but it’s in the higher registers that we hear a freer, less constricted ring. As we said in our previous V-Class test, intonation has always been superb on every contemporary Taylor we’ve played but again - and, yes, it’s subtle - V-Class sounds slightly sweeter, more in-tune.

Using a Peterson Strobe tuner with both guitars as in-tune as we could get them, depending on what we played, the standard-brace model had us double-checking the tuner. The V-Class just sounds smoother, even when playing quite difficult intervals. As you play across the ’board not least with, for example, a low E root then higher fret partial chords, the V-Class sounds lovely, while the same thing on the standard guitar now seems slightly angular.

Again, the ES2 system is not only hugely simplistic, but seems quicker to dial in a usable sound compared to the standard-braced model seeming to reflect what we’re hearing unplugged.

Progress and improvement can often seem like dirty words in an industry that can appear to be constricted by its past.  If a new build doesn’t follow the principles of ‘vintage is best’ then it can’t be any good... Andy Powers hasn’t exactly thrown that rule-book out of his workshop window, but he has actually installed a few more vintage-y attributes right across the Taylor line in both sound and appearance. So the V-Class doesn’t create a new horizon sound, as such, but it does enhance and improve what was already a cornerstone Taylor model. And that’s whether you’re a cowboy- chord strummer or a new-age fingerstyle percussive maestro.

As we got used to the guitars (even over a relatively short play-test time), what initially sounded like quite a subtle difference between the V-Class and the standard-braced model, became much more profound. It mirrors our thoughts from our initial V-Class test - it’s simply a better tool.