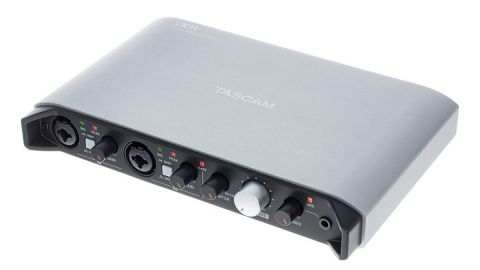 The iXR is about as straightforward an interface as you could wish for. If you need a rock-solid, portable performer, take a look.

When it comes to audio recording, it is important that a balance is struck between ease of use and sonic performance.

We all want to know that when we’ve connected up our chosen interface, the audio quality it provides will be impressive. Equally, when inspiration strikes, we want to be in a position to capture ideas as quickly as possible.

These days, the devices to which we want to commit those musical ideas are just as likely to be laptops and iOS devices as they are studio-based computers, so plug-and-play, cross-format interfaces are increasingly popular.

Function is prioritised over form here, with a business-like design the order of the day. The roughly half-rack-sized unit is decked out in grey, with connections made along the front and rear panels.

The front offers twin combo microphone/instrument/line inputs with Gain dials per channel. Signal and Peak indicator lights provide some (albeit limited) access to levels management. To the right-hand side, there’s a Direct Monitoring dial for setting a balance between recording and playback levels, whilst a larger dial adjusts output level.

The Headphone port is also frontmounted, which requires a mini-jack sized connector. Interfacing connections lie at the rear, where twin USB ports (for coupling to iOS or OS devices), MIDI In and Out, as well as 1/4" audio outputs are provided.

Lastly, there’s a rocker switch to enable phantom power for the microphone inputs. The design of iXR encourages desktop placement, with four rubber feet on the bottom surface. Despite its compact frame, there’s a reassuring solidity to the interface; it combines relatively low cost and a pared-back control set, but the iXR is by no means a cheap, plastic box.

Starting with use on a computer-based system, connection couldn’t really be any more straightforward.

iXR is a truly plug-and-play interface; we tested it with Logic Pro, and as soon as the USB cable was connected, it was available for selection, ready for recording. You can also download a simple Settings Panel software bridge, which allows you to choose the sample rate, monitor in mono or stereo, and control selected other parameters.

Above all, you can be ready to record seconds after getting the interface out of the box. iOS recording requires a download of the free iOS version of this Settings Panel and, in terms of connections, you’ll need to use the iOS adaptor which ships with your Lightning connection cable connected to the ‘square’ USB port, before using the ‘flat’ one to connect from the interface to your iOS device.

After that, pick your iOS software at will and you’re ready to make recordings. iXR is a no-frills interface which is founded on its recording reputation; it provides solidity, high sound quality, and rock-solid performance. Unglamorous? Maybe. Capable? No question.