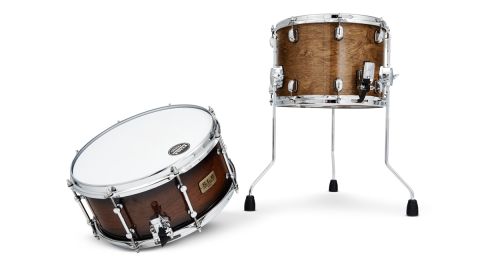 Once again Tama has produced quality, musical drums at a surprisingly affordable price-point. In terms of sound alone, the S.L.P. range is hard to fault and comes highly recommended.

This year Tama has committed to expanding its Sound Lab Project (S.L.P.) range, developing four full kits in addition to a new pair of wooden snares.

This brings the already diverse snare range to a total of 14. The all-new Dynamic Kapur snare is the companion to a full kit of the same name, while the Duo Birch is a standalone snare, in more ways than one...

As the name might suggest, the Duo Birch snare is designed to serve two functions. Its 14"x10" dimensions mean it can either be used as a shallow floor tom or a monstrously deep snare. With the exception of Tama’s Superstar Hyperdrive Duo kit, which includes a very similar drum, this is not something you see every day.

Like the rest of the S.L.P. range, this drum is available in just one configuration and finish. The Transparent Mocha lacquer finish shows off the natural birch woodgrain beautifully, although there is a rather distracting diagonal join which could be more subtle.

Rather than chunky single Starclassic lugs, the Dynamic Kapur features eight brass tube lugs (also finished in chrome) which lend a more classic aesthetic to the drum. This drum trumps the Duo Birch in the throw-off department as it has been treated to Tama’s Linear-Drive model with matching butt-plate complete with secondary strainer. It’s an upgrade that not only looks smarter, but it also makes it a more versatile instrument.

Both drums are supplied with Tama/Evans coated G1 batters and Snare Side 300 heads, and branded with the brushed brass Tama S.L.P. badge.

We choose to start testing by positioning the Duo Birch in place of our usual 14" floor tom. Considering the drum’s meaty size, it makes sense to see how it fares when played in the lower registers. With both heads tuned down, the Duo Birch manages a pretty good impression of a floor tom but lacks the familiar rumble, likely due to its shallower dimensions.

The silver lining though is that the 10" depth makes it respond much faster - working nicely for speedy gospel-style chops. At this tension, turning the snares on does it no favours as the wires have a hard time reacting with the loose resonant head.

With considerably more tension on the bottom, the Duo starts to feel more like a snare drum and, with the batter head still low, creates a seriously wide and fat tone. The wires are astonishingly sensitive given the depth of the drum. As we take the drum up through the registers it becomes quicker and snappier until we’ve completely forgotten that we were using it as a floor tom less than five minutes ago.

Turn after turn, the pitch goes up-and-up with little sign of choking. Moving the drum over to the left of our hi-hats, it continues to function as a funky side-snare that’s tuned considerably higher than our main snare. We even manage to get it up into borderline drum’n’bass territory, before the head reaches the point where it doesn’t want to go any tighter.

Determined to find a middle ground where the drum will function as intended, we try several tension combinations between the two heads. Eventually we find a sweet spot that gives me a super-punchy floor tom tone and a killer fat-back style backbeat; think Larnell Lewis on Snarky Puppy’s ‘What About Me?’. In short, this drum is way more versatile than you might initially give it credit for.

Despite the almost identical price-points of the two drums, the Dynamic Kapur creates the illusion of a higher-end snare. Not only is the rich Black Kapur Burst finish absolutely gorgeous, but the multi-setting throw-off and butt-plate strainer look and feel more luxurious.

Looks aside, the drum also plays wonderfully at a mid-to-high tuning. The wires are sensitive, making ghost notes cut through effortlessly. Tuned low, however, it has quite a papery attack - the shell tone doesn’t truly start to emerge until it’s tuned fairly tight. At this point the drum offers a beautifully fat and warm tone which works great for rock and even funk. Rim-shots draw even more musical tone from the shell and with them, a respectable volume.

With a slightly limited tuning range the Dynamic Kapur essentially has one setting, but that setting sounds absolutely incredible. For £249 this drum is well worth considering for your collection.