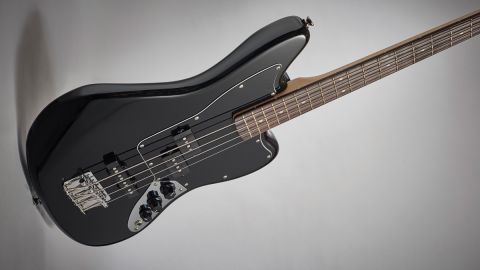 The Jaguar does reasonably well, with a good selection of tones and solid playability.

Anything that draws people to the world of bass and makes them want to play one is a good thing by our reckoning.

The easy playability of short-scale instruments makes them popular among bassists who find a long scale tricky to navigate and manufacturers have been quick to recognise this, with the number of available short-scale models increasing in the past year or two.

It’s no surprise that Squier has now joined the party, with its 30” scale Vintage Modified Jaguar coming in at a pocket-friendly £187. Of course, alongside the sleek playability of short-scale basses, there’s often a compromise in tone due to the shorter speaking length of the strings - so does this Jaguar offer serious bite?

The bass has been made in Indonesia, and it’s basically well assembled, although some short cuts have been taken as you might expect. Agathis has been used as the body wood, which is a cheap timber option, but for the purposes of this bass, it suits the requirements adequately.

It comes finished in a black polyurethane gloss along with a matching headstock, while the distinctive Jaguar body shape always stands out from the crowd. Rear contouring and the upper body bout chamfer are in place, although the upper and lower cutaways are minimal at best.

It’s an unusual instrument in some ways. Its three-ply pickguard seems oddly shaped to us, and many of the components are visibly low-budget. For example, the standard Fender-style bridge is merely adequate, and although the elephant-ear machine heads are securely fitted, the A-string tuner on our review model was loose and slack in operation.

Fortunately, the four-bolt neck pocket is a tight connection, while the polyurethane finished neck with its slim dimensions and ‘C’-shaped neck profile give the bass a sleek playability and feel.

With a nut width of 38mm, it feels similar to a Jazz bass at the ‘working’ end of the neck and the setup is generally good, with a reasonable action and no sharp fret ends.

Obviously, the first thing that strikes you about any short-scale instrument is the reduced dimensions of the neck, as well as the weight benefits and balance. Once you start playing this bass, you begin to realise how tight the finger spacing and fret placement are, most tangibly from the middle of the neck upwards towards the body.

Acoustically, the bass sounds punchy and responsive without sounding too woolly: this is confirmed upon plugging into an amp. The tones and general character are fine: it’s just the feel of the instrument that is different to a regular 34” scale bass.

The general tone of each pickup is solid and usable, with the response across all four strings bright and resonant. The neck based split-coil gives the bass a warm, rounded bottom end with some low-mid punch, while the bridge-located single-coil offers a characteristically brighter tone with some midrange honk for good measure.

Dialling in different amounts of volume to each pickup highlights the general tonal palette. Although the first volume control and tone control operate smoothly, with a gradual increase and decrease in level, the second volume pot seems to be more of an on/off affair - another cut corner, perhaps.

Thankfully, the tone control offers plenty of light and shade; roll it off and you’re presented with a fat, warm bass signal.

Dub, reggae, blues and soul players who don’t want top-end sparkle will enjoy this tone. Gradually opening the control up brings some rasp and grit: this becomes particularly noticeable if you play with a pick. If you’re looking for rocky, punky clank, then open the tone control up fully and go for it

To summarise, the sounds on offer here aren’t radically different from those of a long-scale model or a passive bass of a similar configuration. The real difference comes in the feel and physical nature of this instrument.

We can certainly see this Jaguar appealing to first timers, or as a practice bass around the house. Squiers tend to be a mixed bag, with certain models blowing the competition away, so as with any bass, take each instrument on its own merits.

If possible, try out several examples of the same bass if you can: you may notice differences in weight, tone and performance. Some of the short cuts made here detract from the package - but at a measly £187, you pay your money and you take your choice.