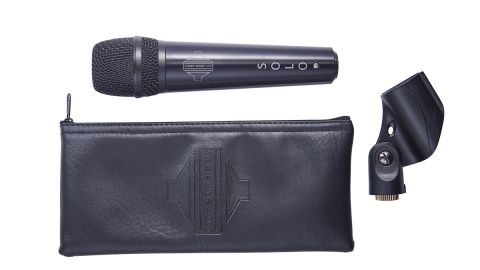 For live vocals the Solo is a no-brainer, especially at this price, but it will easily find a home in the studio and on non-vocal sources.

Sontronics’ Solo takes the successful recipe of the STC-80 hand-held dynamic mic and gives it a twist and a tighten with a supercardioid polar pattern.

A narrower pickup pattern improves off-axis rejection, reducing spill and increasing source focus, but this can be a trade-off with on-axis frequency response. Before checking how well Sontronics has balanced this equation, let’s get physical.

The Solo is a well-weighted, solid microphone; light hand-held mics suck. The grille has a flat front which we much prefer to the bulbous type: it not only gives a more consistent distance guide when up close, it is also less likely to knock your front teeth out in a rowdy club gig.

The output impedance is higher than the average dynamic mic, and this is reflected in the healthy level at the preamp. This bodes well for controlling noise and feedback in live event gain staging, as well as studio usage. A beefy output is useless if the sound doesn’t pull its weight, which in this case it does.

The Solo is an instantly gratifying mic which requires no (immediate) EQ. The low-end is full and rich when you’re up close, with the high-end present and clear without harshness in the sibilant range. This does not mean a scooped mid-range, but one that will take its space in a mix with little additional work (source allowing).

We can’t imagine wanting to boost the upper range, which in the live setting is a bonus considering the paucity of many venue mixing desk EQ circuits, which seem to jump between ‘dull’ and ‘searing feedback’.

Supercardioid designs can get a tad peaky due to the phase issues inherent in non-omnidirectional polar patterns, but this deficiency does not appear to trouble the Solo. Off-axis rejection is excellent, allowing the vocalist to dominate, but there’s still plenty of on-axis range to allow the mic to be worked ('mic technique').

Whether up close or at a respectful distance, the Solo takes plosives well, and what does get through is more pop than thud. There is little handling noise and, again, what there is is kept well out of the low-end. It’s these things, coupled with a good sound that separate the wheat from the chaff in the world of hand-held mics.

Aside from vocals, the Solo works well on guitar amps, especially clean sounds where the crisp top-end works well capturing the defining transients. As an acoustic guitar mic it can provide a full sound without getting bogged down in boxiness or dulling the percussive and harmonic detail.

We didn’t get to try it on drums, but knowing the mics we tried it up against we can tell it will work well, especially on snare where the supercardioid pattern will reduce hi-hat spill.

We are attached to our old SM58s, but they are no match for the Solo, which is not that much more expensive. Sontronics have put together a great hand-held vocal mic that will find a role even when there are no vocals to amplify/record.