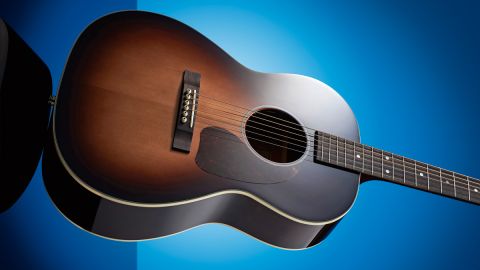 If 2017 has proved one thing to us - apart from unpleasant political fallout and the unlikely comeback of bum bags - it’s that the mid-priced acoustic market is one of the most exciting, gear-packed places to hang around right now.

With the quality on offer for the money, the need to trade up again to the high end is becoming a little questionable. And Sigma has proved to be the dark horse in that regard; still a surprisingly unsung brand that began as an affordable offshoot of Martin and came back as a separate entity, albeit with its estranged big papa’s shape influence and a continued commitment to quality touches for the price point.

Here, though, Sigma seems to be looking over at Gibson’s LG parlour-sized flat tops for inspiration. The company is getting there too with the rich vintage Sunburst and open-gear tuners for a strong vintage look that’s complemented by a tortoiseshell scratchplate. Those tuners are backing their looks with performance as well: using Grovers is a big plus.

If you’re looking for warmth and boom, parlours aren’t usually your ideal destination. And so it proves here. But this guitar represents the folk guitar traits in spades: strong trebles, punchy mids and a low end that’s defined and resonant without being brittle. It’s a truly superb balance.

The wide spacing couples with a low profile to create a neck feel that shouldn’t take much adjustment for most acoustic players. We’d prefer a satin neck over the gloss here but round the front, the bright voice of the LGM-SG2 is great for skin on string action. It also reveals a deeper bass response in fingerpicking than many other parlours we’ve encountered.

The mahogany back and sides here are laminate. But we’ve played plenty of laminate examples that sound as good as certain solid-wood acoustics and this is one. The positive trade-off on spec here becomes Fishman’s Sonitone system.

Now, the Sonitone has always been a solid performer when we’ve encountered it with other mid-priced acoustics in the past, but it really sounds at home here. The lively voice of this Sigma converts very well to its plugged- in character - and it’s appealing even without rolling back the treble on the tone control, without a hint of piezo brittleness.

For its price point, a gigbag could have been a useful addition to the package but while others in the competition will offer that or solid back and sides, the plugged-in performance helps to make the all-round performance here a must-try for anyone looking for Gibson 1940s vibes, or something away from the dreadnought herd.