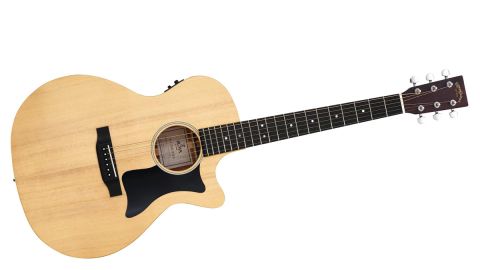 The performance of this guitar further strengthens this company’s commitment to its founding values.

Despite its history as a CF Martin & Co brand at the beginning of the 70s, there’s still the sense that today Sigma is a dark horse in the contemporary acoustic world.

Indeed, many newcomers may not even be aware of its roots as an affordable Japanese-made entry-level to the Martin family. Although the rights to the Sigma name were purchased by German company AMI ahead of a 2011 relaunch, the familiar Martin shapes and logo remain along with a reputation for quality in the lower and middle areas of the acoustic market for these Chinese- made instruments.

Still, the sense that Sigma is a little under the radar in terms of visibility in the UK remains, but its line continues to expand and so does its sources of inspiration beyond its originator’s classic flat tops.

Like Martin, Gibson has its own iconic examples of acoustic design. Models that are part of the lineage of rock ’n’ roll, folk and country music - the J-45, SJ-200 and Hummingbird. And Sigma has its sights on them with the JM-SG45+ and the GJA- SG200+.

The GMC-STE is an electro cutaway that’s very much in keeping with Sigma’s roots in Nazareth - an OM cutaway that comes in at a price that’s viable for newcomers to electro-acoustics and those who may need one for the occasional acoustic set or songs live.

It’s understandable to approach a £300 acoustic guitar with muted expectations. Unsurprisingly, the back and sides of the GMC-STE are laminate mahogany. The Sitka spruce top is solid and our model’s top has characterful streaks in its grain. The overall impression of the build is an instrument above its price-point. The low profile mahogany neck is satin-like, as is the case with the body, the edges of the Micarta ’board rounded.

It should be a welcoming experience for new acoustic players, with the shallower OM depth bringing the guitar closer in a seated position than most of the ever-popular dreadnoughts. It’s heartening to see a bone saddle and nut here too, a calling card of the kind of value Sigma offers and features that have an impact on longevity and tonal performance.

The GMC-STE offers a fairly low action and a bright character all round. Zingy highs and punchy mids are in keeping with what we’d hope from a Martin-style OM, but the sense of balance with a resonant low end is still a surprise for a guitar at this price. It feels tactile for fingerstyle folk, rewarding the dynamics of touch and suggesting a guitar that could go the distance with a beginner.

Undersaddle pickups are a compromise by their very nature. But that has advantages when players need to make themselves heard in a full-band sound.

Our Martin-style GMC benefits most from the character of its piezo, and the bass control is useful to shape the low end to taste for different playing applications. But the qualities of the guitar come through more than one might imagine with a high output and far less of the brittle nature that can surface from electros in this price bracket.

Since Sigma’s return in 2011, its consistency has been notable and this model adds to that reputation. With the continuing development of manufacturing technology and fierce competition between brands, the GMC- STE+ shows how much value is on offer for acoustic players at the entry level. We found it to be of a standard that transcends the connotations of a starter guitar - it’s hard to think of a better electro to begin on for the price.

The performance of this guitar further strengthens this company’s commitment to its founding values. It’s also a reminder that this often-overlooked name really should be a go-to for players to try.