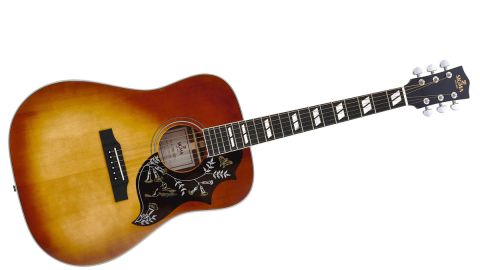 The DM-SG5 offers some of the Hummingbird character and charm at a more accessible price.

Despite its history as a CF Martin & Co brand at the beginning of the 70s, there’s still the sense that today Sigma is a dark horse in the contemporary acoustic world.

Indeed, many newcomers may not even be aware of its roots as an affordable Japanese-made entry-level to the Martin family. Although the rights to the Sigma name were purchased by German company AMI ahead of a 2011 relaunch, the familiar Martin shapes and logo remain along with a reputation for quality in the lower and middle areas of the acoustic market for these Chinese-made instruments.

Still, the sense that Sigma is a little under the radar in terms of visibility in the UK remains, but its line continues to expand and so does its sources of inspiration beyond its originator’s classic flat tops.

Like Martin, Gibson has its own iconic examples of acoustic design. Models that are part of the lineage of rock ’n’ roll, folk and country music - the J-45, SJ-200 and Hummingbird. And Sigma has its sights on them with the JM-SG45+ and the GJA- SG200+, as well as the DM-SG5+ we have here. With a 2018 Gibson Hummingbird retailing at just under £3,000, it’s beyond the reach of many, although Epiphone, of course, offer their own affordable spec electro at a fraction of the price.

Sigma has opted for a vintage look with the square-shouldered dreadnought DM-SG5+. The decidedly 70s typeface isn’t coincidental - this guitar is apparently a recreation of a Japanese model the company produced in that first decade of its existence. But the scratchplate and parallelogram inlays highlight another inspiration. After all, Gibson isn’t shy about calling the Hummingbird “the world’s most distinctive acoustic guitar”.

Sigma does a fine job of capturing the American heartland vibe. Like the recently-reviewed GMC, it’s another 14-fret body flat-top with Sitka spruce top and the bold flame afforded by laminate mahogany back and sides. And like Gibson’s own Hummingbird, it features the smooth action and stable performance of Grover tuners. The scratchplate isn’t of the thickness of Gibson’s traditional tortoise Hummingbird motif, and the gold in the plant and hummingbird etchings seem duller, but the design itself is remarkably close.

The thin UV Heritage Cherry finish of the top is key to the aesthetic here, lacking the warmer red tones of Gibson’s hummingbird at the edges. We’re not sure how ‘cherry’ you can call this, but the paler tones have their own appealing, cloudy quality.

What’s surprising is how close to Hummingbird territory this DM-SG5+ gets. It may not have the breadth of dynamic response to more experienced ears, or ageing potential of its nitro-finished solid wood-constructed inspiration, but it’s not as far away as some might imagine. And for those priced out of Gibson ownership (and have always lusted after a Hummingbird), that’s welcome news.

It’s a vintage-y voice that feels at home within the plains of Americana and country. The higher end is warm and rounded and blends with deep, robust lows. But while some dreadnoughts reward a lighter touch, it feels like you need to dig in a little more to mine the qualities of this guitar and its medium action. A heavier plectrum pays dividends for the dynamics of rock strumming and wringing resonance from single notes too. It highlights how easy it is to overlook the importance of pairing the right pick with your playing approach and instrument.

We wondered if the DM-SG5’s lack of dedicated bass control would prove an issue on a guitar that has such a bold low end, but it feels well-balanced and quite warm for an active piezo system. But the Sonitone performance would benefit from the added EQ control offered by an acoustic combo or preamp unit for gigging acoustic players.

Since Sigma’s return in 2011, its consistency has been notable and this model adds to that reputation. The DM-SG5 offers some of the Hummingbird character and charm at a more accessible price.