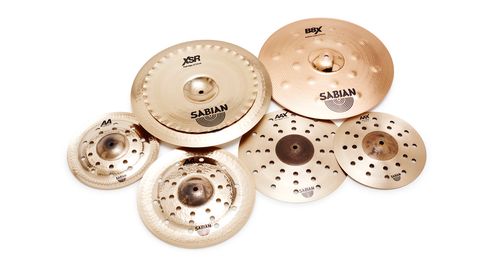 Effects cymbals are one of the biggest trends in drumland at the moment, and with its latest editions, Sabian has hit the brash, trashy nail on its unlathed head.

Hats, crashes, rides and maybe, if you were feeling flamboyant, a splash or a China? Well, that was a while ago now.

Effects cymbals - fast, trashy and cutting - aren’t a new thing by any means, but they are a much less niche product. To follow suit, we drummers have become a discerning bunch, with ever-evolving sophisticated tastes, and cymbal companies are obliging by plying us with any iteration of metals we can think of.

It isn’t just reserved for the upper-echelons of budget, either. Sabian’s latest clutch of effects cymbals kicks off at just over £100, meaning that explosive accents are within easier reach than ever.

Sabian is no stranger to the world of white noise-tinged cymbals. The geometric stylings of the Rocktagon, the glassy tones and petrol haze of the VFX line and the compressed air bursts of the Chopper are just a few of the more exotic concepts the company has released. The cymbals here, while definitely off to the side, aren’t quite so left of the dial.

Launched at NAMM for 2017, the new effects comprise nine cymbals across four of Sabian’s ranges: three AAX Aero splashes, three Mini Holy Chinas, two Ballistic crashes and one pre-matched XSR Fast Stax. On test today are six models from across the line-up: 10" and 12" Mini Holy Chinas and AAX Aero splashes, plus a 16" Ballistic crash and the Fast Stax.

We set up all of the review effects on a forest of stands for direct comparison. The Aero splashes are derived from Sabian’s Air splashes, but with one major difference: the added holes. With a whopping 24 and 36 holes respectively, and measuring approx 11mm in diameter, it begs the questions: are these the actions of a disgruntled drill press operator, and where’s the rest of the cymbal?

We soon stop pondering such superficial details as both the 10" and 12" cymbals sound fantastic. The unlathed bell and sieve-like holes combine to produce a perfect balance of traditional splash and white noise in a way that remains smooth. They’re thin enough to open up at lower velocities, but strong enough that they never feel fragile.

Next up are the Mini Holy Chinas. Renowned for their noisy, cutting sound, it’s arguable (usually from guitar players) that China cymbals don’t actually need any enhancement in this area. However, if we are to fault the squeakiest wheel in our cymbal bag, it’s that Chinas can sometimes be too overbearing, too ‘gong-like’ without enough wet crash, and the sustain is just a bit too long. The answer? Drill holes in it!

The 10" and 12" versions we have here feature 20 and 30 holes each, and the increase in volume from the splashes is immediately noticeable, yet they complement their mini-brethren well. They’re cutting and, as expected, deliver a delightfully trashy burst of noise. Best of all they’re lightning quick. We did find that in isolation the 12" had a slight harmonic ring that sustained, but once you unleash it during a groove, it’s inaudible.

Stacking cymbals can be like rolling dice - it might work, it might not. First, there’s getting the physical combination right, then there’s the tonal blend. Sabian has done the legwork for us with the Fast Stax, matching what is essentially a thin 13" hi-hat top (complete with ‘Air Wave’ edge) with a 16" China.

As with all stacks, you can tailor the decay and sizzle by tightening or loosening your stand’s wingnut. We found that the sweet spot was somewhere just past the middle of the travel. Too loose and there was a bit too much rattle, too cranked and it got a bit on the ‘closed hat’ side. The Fast Stax is diverse though, offering soft yet cutting noise like a shaker through a distortion pedal that will work across everything from fusion ride patterns to hardcore breakdowns.

Finally, there’s the Ballistic crash. This is the only cymbal on test to use B8 rather than B20 bronze, and Sabian has actually developed new hammering tools in order to make it.

The Ballistic and its 18" counterpart are hammered from beneath to create the molehill ridges you can see in the top, diffusing the sound wave pattern in a way that Sabian says results in an upward pitch bend with increased response. In practice, though, we found that with lighter strikes the Ballistic is somewhat muted.

Taking a cue from its name, we leather it to really make it open up to a full crash. Once it gets there, it offers a pretty traditional crash sound, with a hint of noise. That said, it’s a good effort and great to see Sabian offering innovation at the entry level. The Ballistic crash will definitely pay off for cash-strapped heavy hitters.