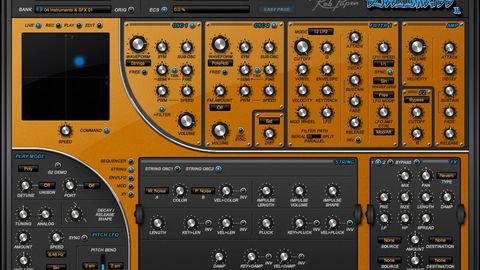 An affordable low-frequency workhorse, SubBoomBass 2 will rock your world.

While the original is still very popular with dance music producers, a refresh is certainly due - particularly given that the instrument on which it’s based, Predator, benefited from its own v2 update just over a year ago.

SubBoomBass 2 is a two-oscillator (each with a slaved sub oscillator), dual-filter synth with onboard sequencing and effects, and an Easy editing mode for concealing all but the most fundamental controls. The majority of the interface is pretty much the same as that of v1, with everything scaled up to make room for the new X/Y pad, the preset menus and ancillary controls shifted up top, and all text made slightly more legible.

Users of high-res displays can keep their opticians happy by availing themselves of the new Big Screen mode, which upsizes everything nicely.

The main area of improvement for the GUI is the central multifunction panel, which now consists of five pages (up from two), catering to the all-new physical modelling String engine (see Mr Strong) and X/Y pad, and the expanded Mod Matrix, which we’ll come back to.

The source signal for the String model is a blend of any two from SBB2’s selection of analogue and noise waveforms. The resulting ‘impulse’ is fed into a short feedback delay, the feedback level (and thus tonal character) of which is set by the Impulse Length knob. The rest of the String controls govern the envelope shape and length of the impulse, as well as the pluck point on the string (ie, at its central tensile point or towards one end), the cutoff frequency of a low-pass filter in the delay loop, and the response of said parameters to incoming MIDI note value and velocity.

The String model makes a great addition to SubBoomBass’ arsenal, but it also makes us long for a third oscillator, as we often find ourselves wanting to add it to an existing two- oscillator patch, rather than swap it out for ‘half’ of the sound.

Each section also now incorporates a utility menu, housing various editing functions (Copy, Paste, Sequencer Transpose, etc) and facilitating saving and loading of section presets. So, whenever you come up with a Filter, effects or Sequencer setup that you want to reuse independently of the rest of the patch, you can save it into the preset library for that section. Very nice, too.

The main thing that makes SubBoomBass specifically bass-centric is the selection of waveforms available to the oscillators. In version 1, this comprised 16 analogue-style shapes and 39 bespoke sampled waves. Version 2 takes things to a whole ’nother level, with all that plus a ton of new samples (all kinds of basses and percussion) and 32 harmonically rich Spectral waves, which make prime fodder for the Symmetry and PWM controls.

The filters have also been beefed up. Filter 1 now has four pre-distortion modes - Saturation, Fuzz, Foldback and Power (waveshaping) - and an extra eight filter types (for 22 all told), while Filter 2 gains a Resonance knob and the same full list of types as Filter 1. The new types aren’t a showstopping addition, being fairly unexciting variations on the 12dB and 24dB options, but having them all available to both filters is a extremely welcome.

Completely new in SubBoomBass 2 but already installed in several other Rob Papen plugins, the X/Y pad is a brilliant modulation source. With up to three target parameters assignable to its X and Y axes, you can drag the puck around in Live mode for performance modulation, or record your movements and edit the resulting path for automated playback as part of the patch.

The X/Y page in the multifunction panel gives control over playback speed, quantising of path nodes to time and grid, looping and more, and a menu of editing options (Flip, Rotate, preset shapes, etc) keep the workflow smooth. You don’t get the polyphonic mode of Predator 2, Blade and Raw, though, which is a shame. Sure, this is a bass synth, but the rest of it’s polyphonic, so why not the X/Y pad, too?

The Mod Matrix still only has four assignment slots, but since each modulation source can be assigned separately in its own section, we can just about take this as an acceptable cap. The Matrix now has fields for adjusting the high and low limits of each assignment, and offsetting the base level of the target parameter when no modulation is incoming. Also, the right-click menu for every knob now includes entries for assigning it to any individual modulator or Mod Matrix slot.

Down in the v2 Sequencer, the two Oscillator lanes are visible at all times, making it a bit easier to create the wave sequencing patterns for which SubBoomBass is known.

Up to four patterns can now be stored in a patch, too, doubling the previous limit; and the new Pattern mode lets you string them together through up to 16 steps, with looping if required, and per-step adjustment of pitch and volume. As well as its obvious utility for creating extended basslines, at very high speeds, the ability to chain patterns also makes for an interesting sound design tool.

We were already big SubBoomBass fans, so expectations of v2 were high, especially taking into account how long it’s taken to come round. Thankfully, SBB2 is a fantastic upgrade, making it a more flexible, sonically colourful synth than before.

The new waveforms, X/Y pad and pattern sequencing are our the highlights for us, and the only things we found ourselves wishing for were visual feedback of parameter modulation, which every synth should have these days, and a dedicated sub oscillator (or general purpose third oscillator with sub option), as mentioned in our review of v1.

Unarguably, though, one of the synth’s best features remains the price - it’s an absolute bargain, whether upgrading (£34) or buying for the first time.