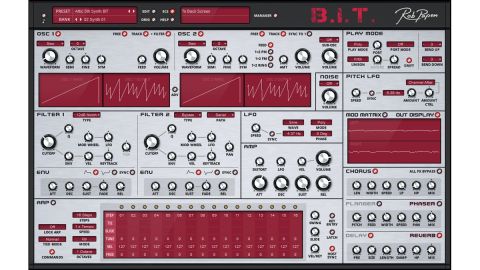 Rob Papen’s most bread-and-butter synth yet sounds the business and holds its own sonically against pricier competitors.

The latest softsynth in Rob Papen’s ever-expanding range is remarkable for being... well, unremarkable – in a conceptual sense, at least.

You see, B.I.T. (which stands for ‘Back In Time’) is a straight-up, “pure” virtual analogue modelling synth – something that has never existed in the Papen catalogue until now.

All of the great man’s previous synths have been based on ‘digital’ oscillators, and while their extensive sampled waveform libraries invariably include single-cycle analogue shapes, it is nonetheless surprising that it’s taken this long for one of the industry’s most prolific developers to get round to building the kind of back-to- basics synth that the majority of the competition cut their technological teeth on.

Analogue throughout
B.I.T. (VST/AU/AAX) is a two-oscillator virtual analogue mono/polysynth with an additional noise oscillator (white or pink) and a sub oscillator slaved to Osc 2.

The selection of 11 waveforms available to the main oscillators includes eight standard shapes (square, sine, triangle, HalfSine, SineSaw, etc) as well as white, pink and tuned noise, while the sub can output a sine, square or saw.

The oscillators can be tuned in octaves, semitones and cents, and run free or retriggered; and the Symmetry knob adjusts pulse width for the square wave and skews all the other waves in harmonically interesting ways.

There’s plenty of modulation potential, too, with Osc 2 syncable to Osc 1, and open to pulse (PM), frequency (FM) and ring modulation from the same; and both oscillators able to self-modulate via the Feedback control. The last is an unusual inclusion that serves as an inspiring source of searing raw tone distortion.

Clicking the Advanced button between the two panes switches them to a handy modulation section, wherein one of a pair of dedicated envelopes and LFOs can be applied to each oscillator, independently modulating the Volume, tuning, Symmetry and Feedback controls.

This is a particularly neat feature, making it supremely easy to dial in a bit of movement without having to negotiate the modulation matrix. Similarly useful is the dedicated Pitch LFO, which introduces vibrato and can itself be modulated by any of B.I.T.’s other mod sources – see Modular citizen.

The Unison menu houses a lengthy list of up-to-four-voice stacking possibilities, starting with variable detune and stereo spread, before getting into a variety of octave splits and fixed chord shapes.

Wired for sound
The oscillators and noise generator feed into two analogue-modelled resonant filters, arranged in series or either of two split routing modes. Low-pass, high-pass, band-pass and notch types are available at 12 and 24dB/octave, as is a comb type for special effects.

Each filter is helpfully hardwired for modulation, sporting depth controls for mod wheel, velocity, keytracking and the Free LFO, plus an ADSR envelope with additional bipolar Fade parameter for a second attack or release stage after the Sustain level is reached.

The Amp also has its own ADSR envelope and Free LFO depth knob, as well as a per-voice distortion amount control. Both the filters and distortion are wonderfully phat and visceral.

The FX section follows in the footsteps of other Papen synths, offering Chorus, Flanger, Phaser, Delay and Reverb modules. We’re delighted to see that the enforced choice of reverb or delay that we complained about in our reviews of Vecto (8/10, 269) and Go2 (9/10, 258) has been addressed. Here, all five modules are simultaneously available. They also sound fantastic, particularly the reverb.

For automatic note generation, the onboard Arpeggiator/step sequencer will be familiar to users of other Rob Papen instruments. Providing the gamut of standard arpeggiation styles (Up, Down, Random, Reverse Ordered, etc) and/or up to 16 steps of sequenced pitch and velocity variation, with tied steps, portamento slides and swing, it’s powerful enough for serious creativity without being overly complicated.

The sequence can be locked to change presets without losing your pattern; and the Arpeggiator is also available as a modulation source, freely assignable in the modulation matrix.

Given its comparatively pedestrian premise, we had modest expectations of B.I.T. As it turns out, though, Papen’s fully ‘analogue’ debut is a great success, with a big, beefy, thoroughly adaptable sound, and a speedy, efficient workflow thanks to its straightforward single-screen interface.

Epitomising the very notion of a workhorse synth, B.I.T. can turn its, er, hoof to everything from earth-shaking basses and expressive leads to epic pads, funky arps, attention-grabbing FX and punchy percussion, delivering them all in convincing analogue style with all the subtle fluctuation that implies. And with more than 800 presets included, the sound you’re after may only be a couple of clicks away.

As we find ourselves saying at the end of every Rob Papen synth review, the lack of visual modulation feedback is annoying, but B.I.T. is a versatile and affordable virtual analogue synth with a sound that simply can’t be faulted.

MusicRadar verdict: Rob Papen’s most bread-and-butter synth yet sounds the business and holds its own sonically against pricier competitors.