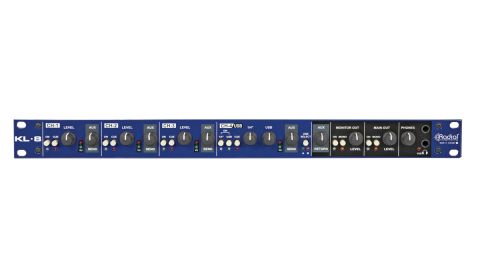 Expensive, but given the build quality, once you have it, the KL-8 may end up sitting at the core of your keyboard rig for the longhaul.

Radial first caught our eye in 2017 with the Key-Largo, a mixer designed specifically for keyboardists.

It assembled a whole host of features that gigging musicians need in a portable, yet pro-level device - stereo analogue-input channels; balanced Main and Monitor outputs with ground-lifts; a USB audio/MIDI interface with 24-bit, 192kHz resolution for incorporating virtual instruments and tracking into a DAW; standard MIDI I/O; and a switchable Aux bus with individual Send controls on each channel. Best of all, Radial put it all into a rugged case small enough to sit on a desktop, in a pedalboard, or on the corner of a large keyboard.

The KL-8 takes the Key-Largo concept further with features that handle a wider range of pro needs while remaining portable as a 1U rack-mountable device. Like other Radial products, the KL-8 is housed in a steel enclosure and feels reassuringly road-worthy. For example, the external power supply locks to the rack to avoid disconnection.

The four-channel mixer accepts stereo and mono analogue input and easily integrates digital audio over USB on Channel 4 (more on this later). Each analogue-input channel has a pair of unbalanced 1/4” jacks and its own input-level control.

The mixer’s Main and Monitor outputs are on XLR jacks, include ground switches, and have front-panel buttons for summing the output pairs to mono. Furthermore, the Main and Monitor outs, as well as the input channels, have individual On buttons so you can use them selectively.

A major difference between the KL-8 and its predecessor is the inclusion of a third output option: dual 1/4” headphone jacks. With a Cue switch on each input channel, it’s really easy to audition the individual channels over headphones without sending their signals to either of the speaker outputs.

The KL-8 also includes a stereo Aux channel with individual Send-level controls for each input. While external effects are the obvious use of the Aux, the KL-8’s Return inputs can, instead, be used as a fifth stereo input for line-level sources, with the front-panel Return knob setting the input level. The Aux section can be deactivated remotely using the Radial JR1-L footswitch.

An additional switch, located on the top panel, is used to route the Aux Return to either all analogue outputs, or to only the headphones and Monitor outputs. The latter configuration is useful when working with audio that should be kept out of the Mains, such as a click track.

A stereo Insert is included for sending the input channels through an external processor or volume pedal. And for players who need additional analogue inputs, multiple KL-8s can be linked together using 1/4” TRS cables. The KL-8 further expands on the Key-Largo’s ability to act as a USB audio/MIDI interface by including two USB ports. This enables you to instantly access a second computer - typically a redundant, backup system - from the front panel or with a JR1-L footswitch.

The KL-8’s USB interface can be used in Live or Recording mode. In Live mode, you can play virtual instruments from the selected computer and bring the audio via USB into Channel 4 of the mixer with 24-bit, 192kHz resolution. Channel 4 has separate level controls for USB and analogue input, allowing you to submix the two signals: for example, a softsynth and a hardware synth controlled by the same MIDI data. Standard MIDI I/O is on the rear panel and can be used with a keyboard controller for playing softsynths and for playing a hardware synth or drum machine using MIDI data from your DAW.

In Recording mode, the USB interface sends a two-channel mix over USB to your DAW while simultaneously routing the computer output to the KL-8’s Main and Monitor sections. Although separate On buttons are on the front for the analogue and USB input of Channel 4, selecting Live or Record mode is done from the rear - inconvenient when in a rack. Similarly, the Aux Return Assign button on the top panel is hard to access in a racked setup.

Overall, the KL-8 delivers far more than expected from a hybrid rack-mixer. It’s easy to set up (compared to fully digital units) and the interface is plug-and-play with Mac OS (Windows users just need a driver.) Once you set the levels properly, the switching is silent, the audio quality excellent, and it simply does its job. The price tag is high, but add up the features and you’ll wonder how you did without it.