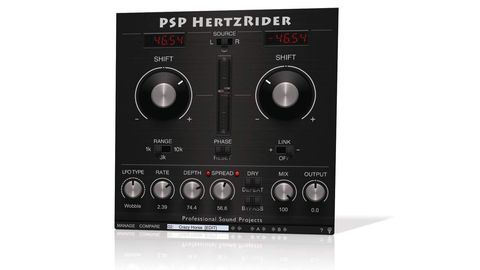 PSP’s new plugin effect is a straightforward and easy-to-use stereo frequency shifter with a couple of clever tricks up its sleeve.

HertzRider’s (VST/AU/AAX) two focal Shift knobs - Left and Right - set the amount by which the input signal is shifted up and/or down on each side. If that signal is stereo, the input can be switched from left and right channels feeding to their corresponding shifters, or to left or right in isolation feeding to both shifters. Three Range settings enable the shifters to sweep up to 1kHz, 3kHz or 10kHz in either direction, and the knobs are non-linear, shifting in smaller increments around the zero point for operational precision. The two Shift knobs are linked by default, moving together, but you can invert this relationship, so that raising one lowers the other, for strange stereo effects - particularly when the LFO, which we’ll get to momentarily, is brought into play - or disable it entirely for independent adjustment of either/both.

At the bottom right of the interface, the Mix knob sets the dry/wet balance, and the Dry Defeat button snaps it instantly to 100% wet when activated and back to where it was when disengaged. Clearly a good target for automation, and a nice feature.

Frequency shifting is similar to pitchshifting in that it moves the frequency content of the source signal, but it’s the way in which those shifts are applied that differentiates the two.

While pitchshifting multiplies the fundamental frequency and every harmonic by the dialled-in amount, maintaining their tonal relationships for ‘musical’ results, frequency shifting adds or subtracts the specified frequency to the entire signal, moving all harmonics by the same amount and messing up their relative octave spacing to yield inharmonic sounds.

So far, then, we’ve got a perfectly viable if not terribly exciting frequency shifter, but it’s the onboard LFO that brings HertzRider to life. Six waveforms are on offer - sine, triangle, square, saw up, saw down and a smooth randomiser (called Wobble) - and the oscillator runs at speeds from 0.1-10Hz. The Depth control sets the amount of LFO brought to bear, and the Spread knob offsets the phase of the LFO in the left and right channels for more stereo mayhem. The influence of the LFO (or the static positioning of the Shift knobs when the LFO is inactive) is visualised in the vertical ‘meter’ in the middle of the interface, which simply shows the amount of shift being applied to the left and right channels in real time.

The only thing missing with the LFO is host sync, which is a strange omission - we don’t see any reason not to provide it for those who want to get their modulation perfectly in time.

HertzRider does a great job of handling the frequency shifting basics, from the precise application of small shifts when retuning drums at one end of the scale, to automating wild breakdown effects at the other, via all kinds of strange metalising, robotising, tremolo, phasing and distortion treatments. The Range switch proves useful for tailoring the Shift knobs to the task at hand, while the LFO adds a very welcome extra creative dimension to the whole thing (the Wobble waveform is awesome for sci-fi pads). And, this being a PSP plugin, the sound quality and responsiveness are second to none.

Every electronic producer should have a decent frequency shifter in their signal processing arsenal, and the simple-but-effective HertzRider not only ticks all the right boxes but comes in at a very reasonable price too.