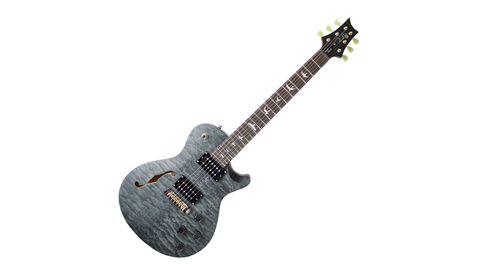 A nicely sorted guitar with considerable potential for the more eclectic player.

PRS’s SE line has long been the go-to for fans of the brand who can’t stretch to the prices of the USA Core range, or the still substantial ‘second-tier’ S2s.

Yet alongside PRS’s classics, there’s plenty of unique SE flavour, not least semi-hollows like the 277 Soapbar baritone, the Custom 22 with vibrato and the Zach Myers signature that we’re looking at here in this new Satin Quilt Stealth Limited run makeover.

The premise is simple: each of the seven Stealth models follow current SE specs but come with a quilted maple veneer-faced maple top and an overall black satin finish. The top appears lightly ’bursted - apparently it’s hand rubbed to fade the black to grey before it’s finished in a satin top coat - creating a demurely marbled appearance. It’s certainly a less posh-looking ‘monochrome’ aesthetic than we’re used to from PRS although the natural inside edge to the bass-side ‘f ’ hole looks a little off with the otherwise all-black livery.

Clearly it’s a thin finish that shouldn’t hamper resonance, which is quite appealing for a semi-hollow construction like this and might tip it over the standard model that’s only available in Trampas Green gloss with a satin neck back.

Whichever version you choose the Myers is a clever design. Based around PRS’s ‘short’ 622mm/24.5-inch scale length the deep-bodied Singlecut presents a Les Paul- like bulk - 57mm overall; 50mm at the rim. But its mahogany back is hollowed - on the bass side and behind the bridge - to create a light weight of just 3.2kg/7.1lb and an almost thinline ‘jazzbox’ feel.

This older vibe is enhanced by the wide-fat neck that feels slightly less V’d  in lower positions than others we have to compare with but its more rounded shape is excellent. There’s a slight ridge to the top edge of the neck, where it meets the fingerboard, that you won’t feel on a USA build, although there’s a little rounding to the fingerboard edge itself.

Fretwork is extremely tidy with a similar, slightly lower, gauge wire to the USA models, according to our caliper, and, unlike the standard models, these Stealths all use ‘CITES free’ ebony fingerboards. Ours is striped dark brown, rather than jet black, with PRS’s bird inlays here in a dappled pearloid.

Tuners are vintage style while the wrapover bridge is fully adjustable with its large at-topped brass saddles. It’s the same part you’ll see on the core-level McCarty or the S2 Mira: a nice piece.

Like many other details, PRS is constantly tweaking its pickups. Here we have the latest version of the SE 245 ’buckers, the 245 ‘S’, “designed at our factory (by Paul Reed Smith) made to our specs,” we’re told, “using some tricks and tips that Paul has been learning over time”. We get a shoulder placed three-way toggle switch and PRS’s original Singlecut control layout in its different positioning to Gibson’s protocol.

Internally, things are tidy with Alpha 500k pots and no treble bleeds on the volume and although there is no pull/push switch to split the pickups, both ’buckers have four conductor wiring so that’s a simple enough job for any modder.

But there’s plenty of fun to be had as is: there’s good acoustic ring and roomy resonance - a little lighter sounding than the construction would have us believe. With DCR’s of 8.7k (bridge) and 8.24k ohms (neck) indicating a little more power, it’s this poke that warms things up nicely. Classic rock grunt at bridge, nice soupy leads from the neck with some semi colouration adding both depth and a little snap.

Whereas some more hollow designs might be troubled by feedback, this is extremely well-behaved unless you want to coax a little by leaning into your amp. Pulling the volumes down does darken the voice and pull back the attack and if you’re planning to use it for cleaner voicings you might consider a simple treble bleed, not to mention coil splits.

Nailing exactly what the added air brings to the table isn’t as obvious as a bigger- bodied semi. It’s the big rock voicing with surprising depth that seems to suit it best, but a different amp set-up delivers moody, jazzier neck pickup styles rather well, with considerable depth and bounce in mix position and strident leads from the bridge. With a little damping by reducing the volume control and a big reverb, that bridge ’bucker sits very nicely in a more rootsy Americana setting. Lots to explore.

As ever it’s a good package and the price includes a sturdy gigbag. It’s a lively resonant guitar with plenty of kick for big rock voicings and enough subtlety and semi colouration to make it surprisingly soulful. If we’re honest, though, it’s a bit overlooked by PRS and we’d welcome a broader colour choice. We’re unlikely to get coil-split switches included at this price but for you modders out there it’s easily done and would make a very good guitar even more versatile.