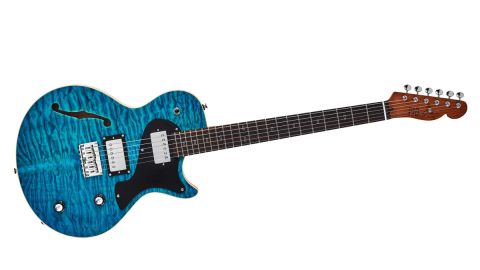 The Carey Elite is already a hit. A guitar we’re happy to endorse.

When Leigh Dovey contacted us last year to see if we were interested in looking at one of his PJD guitars, a Hybrid Woodford, we weren’t sure what to expect.

What we got was a very cleanly built double-cutaway guitar with a fairly unique acrylic top - a guitar we thoroughly enjoyed. Since then,  lenty has happened. UK dealer Guitar Galleries has taken on sales and distribution of the fledgling PJD range, and Leigh and his single assistant are busy. Very busy.

The trim range, which includes that Woodford and a very in-fashion St John offset (plus a new bass model), centres on the Carey Elite we have here - Leigh’s original design. Opening the very neat fitted SKB case (included in the price) and pulling out the striking blue-finished Carey Elite, there’s nothing to change our original enthusiasm. If the Woodford was good, this one raises the bar.

By his own admission, the Carey Elite is Leigh’s “take on an age-old classic design”. We suggest it references more than one...

“I’ve always preferred bolt-on necks, but I’ve never been a massive Strat fan, although I obviously own one,” comments Leigh. “I’ve always liked the Les Paul. So that’s where the design comes from - the best of both worlds. The feel of a Strat or Tele but the look of a Les Paul. I love the figured woods, the binding... and there aren’t a huge number of guitars that have that with a bolt-on neck. And then there’s the [light] weight. Personally, I find a Les Paul too heavy.”

In reality, then, the Carey Elite is quite a stylistic blend: its single-cut slab body certainly shoots at Gibson’s finest, but the cutaway is flatter and wider, and the lower bouts slightly broader than a Les Paul at 343mm (13.5 inches). Yet in constructional style it’s more Fender-like with a 41mm-thick slab body (centre-joined swamp ash) that’s quite extensively chambered leaving a centre block that stops behind the hardtail bridge and is capped with a centre-joined top of quilted maple. The top edge is bound with quite deep (10mm) cream binding that’s barely radius’d on its top edge; the rear edges have a small radius, too. The very light poly finish (which will be a very thin nitro on future PJD models) leaves absolutely nowhere to hide, but the craft is good and very ‘woody’ - you can feel the broad grain of the swamp ash, which is brushed out, although the maple is a much smoother to the touch and is also used for the rear control and switch cavities.

Like the other PJD designs, this is a bolt-on and these are proper bolts, not screws, that locate into threaded inserts in the neck. And what a neck it is. Made from a beautifully caramel brown-coloured roasted maple and perfectly quarter-sawn, it’s topped with a plain dark chocolate-coloured rosewood ’board, peppered with Leigh’s rectangular acrylic inlays that add some subtle modernism, while oversized and contrasting side dots provide excellent position orientation. There’s nothing tricky about the fret job here: traditional craft that’s well executed with a medium-meets-jumbo wire that feels very positive. It’s topped with a Tele-inspired headstock outline and branded-style logo that’s actually laser cut. It all contributes to an honest workingman’s vibe.

The simplicity extends to the quality Gotoh hardware and Bare Knuckle humbuckers, as Leigh explains: “For this first year’s production, and the foreseeable future, we’ll definitely stick with Bare Knuckle. I love their stuff, especially the Boot Camp range.”

The dual Old Guard humbuckers are controlled simply by the shoulder-placed toggle switch and quite wide-spaced master volume and tone. The side-mounted jack plate is plated metal, firmly mounted and very gig-ready. The actual controls are rear-mounted in a copper foil-lined Tele-size cavity. Pots are Bare Knuckle 500kohms and the tone cap is an orange drop .022 microfarad (223J); wiring is modern, not 50s or ‘vintage’ style. There are no coil-splits nor a treble-bleed circuit on the volume, nor any tricky wiring. Both of the Bare Knuckles have four-conductor hook-up cables if you wanted to add coil-splits via a pull-push pot, for example, something that Leigh might add as time goes on.

The stylistic mash-up of the design could well end up being a road crash if the Carey Elite tried to emulate, sound-wise, all of its constructional influences. The Fender scale, neck join and back wood could easily support a Tele-style setup, or even a Strat, but the dual Bare Knuckle humbuckers are an inspired choice, seeming to apply some depth and smoothness with a very vintage-like low output.

There are no wiring surprises or additional sounds via pull-switches, which might have some players wanting more. But less is more in this case, because not only do the BKs capture the tonal balance perfectly, they produce a rich seam of colours thanks to the considered control harness. Pulling the volume back a little is a perfect place to start, and at the bridge we don’t have the over-bright thinness of some vintage ’buckers: this is creamier but certainly not mellow, with the sort of midrange fatness that you don’t get on all semi-solids. Turn up the volume and that lift maximises the sizzle and the subtle power on tap. The neck is perfectly matched with a velvety but clear attack that sits equally well comping clean jazz with the tone knocked back a little, or wails with a vocal valve-y quality plugged into a cranked Marshall. That balance between the pickups means that - although we don’t have independent volume controls - the pickup mix sounds especially sweet for more soulful rhythm fills.

Playability-wise, few players would struggle here. The neck shape is pretty mainstream and not dissimilar to Fender’s American Professional, slightly fuller in the shoulder perhaps with a depth of 21.9mm at the 1st fret and pretty much bang on 23mm by the 12th. The fingerboard radius is actually slightly compound from 245mm (10 inches) at the nut flattening to 305mm (12 inches) in higher positions. The silky feel of the neck back feels superb - it’s a very positive feeling player.

The downside? At 2.74kg (6lb), it’s one third lighter than our reference Les Paul (4.1kg/9lb), so strapped on it feels very different and we’d recommend a textured strap. It actually might simply feel too lightweight for some, but it is available with a mahogany body, which Leigh estimates would weigh closer to 3.4kg (7.5lb). Those top edges could do with a slightly bigger radius, too, and the transition of the neck as it meets the body could be a little more graduated. But these observations really don’t distract from what is not only a very tidily built guitar, but one that we really want to play.

The Carey Elite is already a hit. “Guitar Galleries has never had one in for more than two weeks before it’s sold. Which is a bit crazy,” says Leigh, but we can see why. Crisply made in a very simple, unfussy style, it centres on the important stuff: playability and sound. It’s all wrapped in a lightweight design that’s a great sofa noodler, unplugged, with an engaging resonant voice. Plugged in, it’s an old-school easy drive that just lets you get on and play. There are plenty of options, too, and the price is more ‘quality factory’ than ‘über boutique’. It’s early days for PJD, but this is a great example of British craft and ingenuity that’s rooted in the past but seems refreshingly contemporary. A guitar we’re happy to endorse.