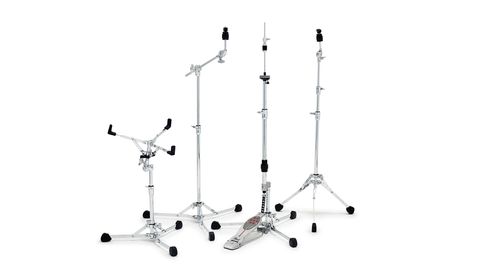 Flat based hardware is all the rage. We’ve recently reviewed both Ludwig’s Atlas Classic and DW’s 6000 Series Ultralight.

Gibraltar also does its 8000 line, Tama has dabbled, and Pearl offers this 150 series. All these companies start from stylistic throw-backs to the 1960s then add the benefits of modern features and sturdy build.

As with the other sets, Pearl offers a snare and hi-hat stand with straight and boom cymbal stands. And they are available solo or as a quartet.

Each company making flat-based stands has its unique design features and Pearl’s trump card, if you’ll pardon the word, is the fact its snare and cymbal stand bases are reversible.

The flat bases are single struts of steel with good-sized rubber feet. They are braced by smaller struts and locked by a comfortable wing screw. But at the bottom of the stand tube there’s a drum key nut and by loosening this, the whole tripod assembly can be slid off, inverted and slipped back on - transformed into a single-braced conventional tripod stand.

You could argue this defeats the idea of having flat-based stands, but then there may be situations where you need a bit of extra stability or space and the option is there. Note also that other manufacturers’ flat-based stands can at least be lifted enough to form low tripods where overlapping is desirable.

Incidentally, Pearl’s 150 hi-hat does not have the reversible tripod - it’s impossible due to the pull mechanism, which has a direct action via a heavy chain, offset from the lower stand tube.

The snare stand basket is a strongly braced three-arm design with decent grippers and has Pearl’s gearless Uni-Lock tilter for smooth and accurate angle adjustment. The large plastic wheel thumb screw for the basket almost collides with the large thumb screw for the tilter, but it’s a minor inconvenience given the flexibility offered.

The straight cymbal stand has three sections with a low bottom section (42cm/16.5") - useful when you want to set a cymbal relatively low down, as opposed to the boom stand which has a relatively higher bottom section at (53cm/21"). The boom arm is the usual hideaway type so you can convert from straight to boom as you see fit.

Cymbal angle is controlled by Pearl’s gearless Uni-Lock tilter which is smooth and firm and the capping wing screw is a large plastic moulding. Beneath this there is a minimum-contact cup support topped with reversible half-foam-half-felt washers.

Cymbals are thus cushioned lovingly and lightly. The hi-hat is the bulkiest item, and feels reassuringly solid. A heavy-duty chain action has a plastic wheel spring tension adjuster for feel, while the footboard is fitted with Pearl’s new Redline Traction Plate. This is an oval insert plate that is removable by undoing four Allen key grub-screws and can be upturned to have the smooth section higher or lower on the footboard. A small thing, but if you’re a toe slider or barefoot player then you might appreciate this flexibility.

Flat-based hi-hats have a tendency to rock but Pearl has pretty much eliminated this via the weight of the pedal and the strength and length (30cm/1ft) of the steel legs. A memory lock at the tripod base further secures the whole shebang. And although the tripod doesn’t invert like on the other stands, the footplate can be swivelled around and locked in place to allow for double pedal (or other pedal) positioning.

There are no memory locks at stand section housings but we didn’t miss them - they are not really needed and would only add to the weight.

This is because the DW stands are considerably slighter in overall build and have aluminium legs. As a result they are surprisingly light, but correspondingly less stable. We’ve heard drummers claim to use them for heavy playing but we did not find this. They are great for light playing though, whereas Pearl, Ludwig and Gibraltar’s stands will weather forceful rocking. Horses for courses.